The JoJo Stardust Crusaders Ending Theme Is “Walk Like An Egyptian”

Hirohiko Araki‘s manga masterpiece JoJo’s Bizarre Adventure has an intimate connection to western pop music. Characters from Killer Queen to Notorious B.I.G. to Dirty Deeds Done Dirt Cheap are seemingly named after whatever Araki was listening to at the time. There are so many names like this that they’re are often changed in English JoJo translations… for fear of legal repercussions from the original artists! 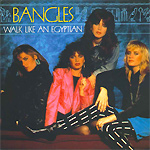 When the anime came around, Yes’ “Roundabout” was licensed for the ending theme, because, let’s face it, a surreal fantasy action comic that’s been running for nearly 30 years through eight generations of protagonists is pretty prog rock.

The moment the third anime chapter (Stardust Crusaders) was greenlighted, fans started to speculate what song would be used for the ending credits this time. Perhaps something by Ronnie James Dio… or would that be too on-the-nose? Because the series deals with the characters’ journey to Egypt, many fans thought it would be a hilarious joke if the Bangles’ “Walk Like An Egyptian” was used… and then, of course, it was.

This wasn’t let out of the bag until this week’s third episode, when it’s revealed that JoJo and company are actually going to Egypt. The second episode even ran with plain text-only credits to maintain the surprise! Good job to David Production for giving JoJo fans an expensive chuckle. Stardust Crusaders is streaming now on Crunchyroll.