Attack on Titan: Before the Fall Review 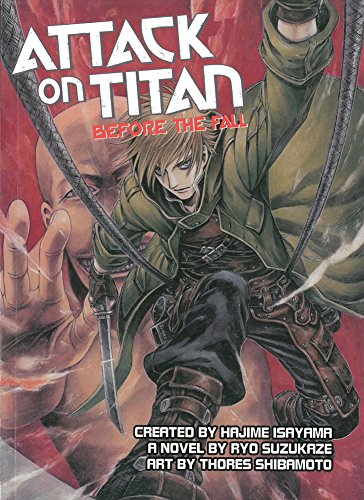 One of the nice things about Hajime Isayama’s Attack on Titan series is it opens itself up for so many different branches of storytelling. Sure, everyone loves following the intense exploits of Eren, Mikasa, and the rest of the core cast as they attempt to take down the Titans and save humanity for good, but there’s so much mystery at its core that there’s plenty of room for further exploration. Attack on Titan: Before the Fall is Ryo Suzukaze’s chance to follow one of those paths, offering a glimpse into the creation of the series’ crucial means of battling Titans, the Three Dimensional Maneuver Gear.

It didn’t start out with that name, of course. It all started as an inkling of an idea in the mind of a craftsman named Angel Aaltonen, who aims to take down the Titans for both personal reasons and for the greater good. As its name implies, Before the Fall is set before the events of the manga, in a time when the citizens within the walls only had vague ideas and crude mental images of the Titans and the threat they pose. Even Angel isn’t quite sure what to make of them in the beginning, as only the Survey Corps have ventured out into the Titan-infested expanse beyond Wall Maria.

As one might expect out of anything Attack on Titan related, this blissfully ignorant way of life doesn’t last for long, and Angel and his comrades are soon introduced to the kind of havoc a Titan can truly wreak. It’s up to him to devise some way to take them down, and the experimentation will ultimately whisk him away from the safety of his development labs, putting him in face-to-face Titan-slobbering peril on multiple occasions.

Attack on Titan: Before the Fall lives and dies by how interesting its audience finds the Attack on Titan universe. If this had been a direct novelization it would have been an immediate pass, but there’s something alluring about the creation of the series’ key equipment that makes it easy to look past Suzukaze’s dry prose. I haven’t read any light novels beyond this and Vampire Hunter D—unless you count those old Blaster Master and Ninja Gaiden novelizations from the Worlds of Power line—but Before the Fall seems about par for the course.

While Angel’s story is an interesting one, and its breezy presentation will help any Attack on Titan fan burn through this prequel in a matter of hours, there’s a distinct lack of characterization throughout. I can’t think of a single thing that makes Angel stand out aside from his dedication to being a craftsman, and a fondness for overworking is something he seems to share with every other craftsman in the story. Notable personality traits sometimes start to rear their head in other characters from time to time, but everyone is essentially just a vehicle for walking us through the development of the Maneuver Gear.

Before the Fall has the luxury of reverse engineering. If you’re familiar with the equipment in question then you can usually tell where the story is going at any given moment. Despite its shortcomings and relatively bland writing, though, the book succeeds at what it sets out to do. Its landscape is dotted with a handful of action-packed moments, the gruesome standard of the series is upheld, and we get to hang out with humanity while they learn first hand just how nasty Titans are. Thores Shibamoto’s illustrations are nice, too, if ultimately superfluous.

At one point, while prodding and cutting up a Titan in an attempt to uncover a weak point—any weakness at all that might provide a shred of hope—Angel finds himself conflicted. “Why does he have to look so human? Look more like a monster, you monster…” He pleads. That’s why I dig Attack on Titan.