Attack on Titan Anime Continues in 2016 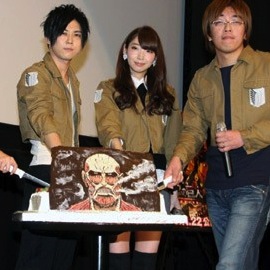 Ever since the Attack on Titan anime ended its run, folks have been clamoring for more and wondering when it would be time for season 2 to officially enter production. Plans were finally confirmed at the opening of the first Attack on Titan compilation movie, with cast and staff taking the stage to announce the second season for 2016.

Those on hand to present the announcement at Shinjuku Wald 9 included Yūki Kaji (Eren), Yui Ishikawa (Mikasa), Marina Inoue (Armin), and anime series director Tetsuro Araki. You can see them on stage in the video below.