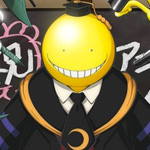 The TV anime adaptation of Yusei Matsui’s Ansatsu Kyoushitsu/Assassination Classroom manga is set to premiere in Japan in January 2015, and a new video is here to serve as a quick tease. This 15-second commercial from the official website comes in two flavors, and features Korosensei introducing himself through narration.

Seiji Kishi (Danganronpa, Persona 4) directs the series, with Makoto Uezu (The Qwaser of Stigmata) on scripts for the Lerche production. See if you recognize the voice behind Korosensei in the quick clips below.

For those unfamiliar, the plot of Assassination Classroom centers on a middle school class tasked with learning how to assassinate their alien teacher. They have one year to do so or he’ll destroy Earth.