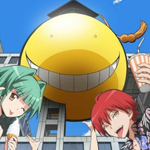 The upcoming TV anime adaptation of Yusei Matsui’s Assassination Classroom was recently revealed, and now we know when to expect it. According to the official website, the anime is set for a January 2015 premiere as part of Fuji TV’s Friday midnight block.

As previously reported, Seiji Kishi (Angel Beats!, Danganronpa, Persona 4 The Animation) is directing the series, with Makoto Uezu (School Days, The Qwaser of Stigmata) on scripts for the Lerche (Unbreakable Machine-Doll, Re:_Hamatora) production.

The live-action film version is also due out in 2015.