Arakawa Under The Bridge Live-Action Film 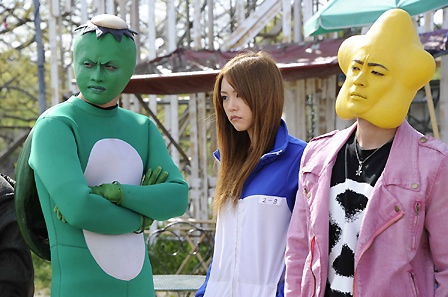 Of all the manga and anime properties out there, Hikaru Nakamura’s madcap Arakawa Under the Bridge seemed like the least likely candidate to be a made into a live-action movie, let alone a live-action show. The slick anime adaptation by Akiyuki Shinbo aside,  Japanese live-action, outside of tokusatsu, tends to shy away from the colorful, cheerfully anarchic antics of characters such as a guy with a giant star-faced mask or a pair of twins that wear large metal buckets as helmets. But still, yens are to be made and, to be sure, there is bigger mainstream money in live-action drama than niche otaku-centric anime, even when adapting such a deliberately weird-for-the-sake-of-weird comic. 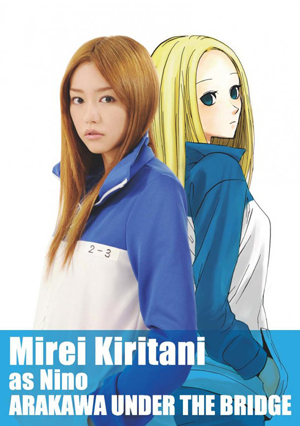 Appropriately enough for such material, the director in charge is the relatively young Ken Iizuka, who also takes over the script and even the editing. The approach taken is aptly youthful, taking liberally from Shinbo’s love of abstract angles and surreal edits and echoing Tetsuya Nakashima’s loud colors and MTV-style editing. In Iizuka’s Arakawa, dialogue is just as stacatto as the earlier anime, if not as screechy. Lines are shot back and forth like a tennis ball at Wimbledon. Since Iizuka eschews Shinbo’s penchant for making the actors scream at nearly every reaction, it almost builds a cool laid-back mood, but it exposes how declawed the story has become in translation.

Staying the same is the premise. We have salaryman Kou “Riku” Ichinomiya (Kento Hayashi) with a borderline obsessive-compulsive honor code to never be in debt, suddenly feeling obliged to shack up with a self-proclaimed Venusian in repayment for saving his life. In both, we get Riku suddenly living in a hippy shantytown as well. However, the live-action version adds the small but significant detail that our hero has been sent by his stony-faced father to survey and evict the residents for loitering to pave way for a new housing complex by the Arakawa river. Adding a little time limit to create suspense isn’t a bad thing in and of itself, for it gives the dysfunctionally idyllic commune a bit of immediate jeopardy lacking in the original, where the characters were more content to just out-snark each other.

That’s not to say there isn’t plenty of it. Shun Oguri as the green kappa Village Chief and Takayuki Yamada as the star-headed rocker Hoshi get plenty of screen time and mug for the camera with the best of them. Yuu Shirota as the cross-dressing Catholic nun-with-guns Sister also brings his best to the character, adding an appropriate level of comical aggression. Whenever they’re on screen, the movie shines brightest.

Unfortunately, where it falls is in the two lead characters, who have had all the interesting bits sucked clean from them to be hollow shells of their former selves. Riku once tended to lash out at the surrounding insanity, whereas here, as portrayed by Hayashi, he seems merely inconvenienced by it. He comes off more as a sweet guy who’s just a little high-strung, telling the crazies to tone it down a notch instead of being almost as conked in the head as everyone else. Then he mostly gets over himself as he embraces life and his lady-love-to-be Nino like Winston Smith on Big Brother.

Mirei Kiritani as the enigmatic Nino fares little better. The confounding young woman from the original reduced to little more than Rei Ayanami with a dash of tsundere at best, and your typical blonde ditz at worst. She comes across as more human, for the worse. This normalization of the main characters reduce Riku’s conflict with his new home and with that, erases most of the tension from this adaptation. So much so that we practically forget about the looming spectre of bulldozers on the way. They aren’t so much bad performances as they are un-engaging ones. 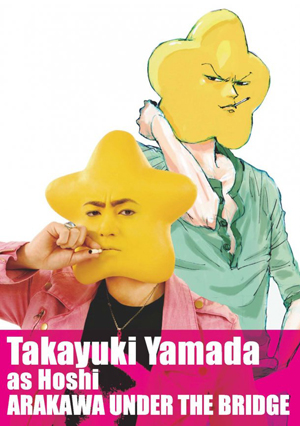 The real killer comes in the third act. At this point, the focus goes from Riku and Nino’s flaccid love story, which at least has the strong supporting cast to back it up, to a cliched and sappy family drama. The pontifications on the relations between fathers and sons connected with the idea of family almost make sense given that we are dealing with a group of homeless bums banding together, but the preachy and sentimental tone evoke the worst parts of the US Hitchhiker’s Guide to the Galaxy movie. Despite explicitly foreshadowing this thread in the first scene of the movie, it still feels haphazard and threatens to take down the movie for even the most hardcore fans.

What director Iizuka does get correctly is the visual look of AUTB. Sure, the cosplay of the entire cast is top-flight, but beyond that it gets at least the surface feel down. Before the opening credits even roll, there is a visual barrage, reminiscent of Run Lola Run, that introduces the cast and story to come at a break-neck pace.

From the text flashing about the screen, the up-tempo soundtrack, whip-pans and slick CG, the movie goes for a self-aware narrative. From the aforementioned spoiling of the finale, even going so far as to show a running countdown of exactly how many minutes remain before the end of the movie. It’s all very smart, slick technical filmmaking. Shame that it wasn’t self-aware enough to realize when it wasn’t being funny.