Last week Aniplex teased that it had an announcement coming up. It turns out they’ve been at work on a new anime called Gunjō no Fanfare (translated as Fanfare of Adolescence) that’s about horse racing and boys learning at a special academy how to become jockeys. Aniplex made the point of debuting their announcement trailer during a Japanese horse racing show. The series is not based on an already-existing story, such as a manga or light novel series.

Fanfare of Adolescence is set to come out in spring of next year. It’s being done at the studio Lay-duce, with Makoto Katō of Bloom Into You working as director. Character design is being done by Hiro Kanzaki, who previously worked on EUREKA SEVEN AO. The music is being composed by none other than Hiroyuki Sawano, who has also composed for Attack on Titan and The Seven Deadly Sins.

The voice actors have been revealed for the three main characters, but not for the rest of the cast. Natsuki Hanae plays Amane Grace, Shougo Yano plays Yu Arimura, and Shimba Tsuchiya plays Shun Kanami.

In the story, Yu has been working as an idol, but he falls in love with horse racing and has to sign himself up for a prestigious academy related to it. Another character, Shun, grew up on an island and was aware of horse racing from the radio. The third main character, Amane, is from England and his dad was a horse jockey. All three characters are 15 years old.

If this anime ends up being anything like Uma Musume Pretty Derby, it might help people feel inspired to help out real race horses.

fanfare of adolescence 2gunjo no fanfare 1 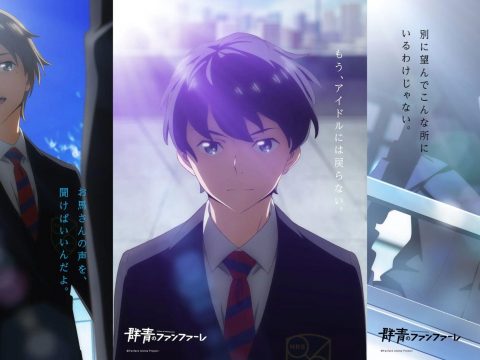 Fanfare of Adolescence Anime Lines Up OP and ED Performers