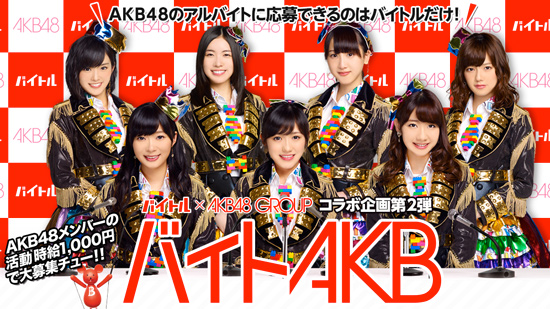 For Japanese pop idol group phenomenon AKB48, 139 members apparently isn’t enough. They’re currently recruiting an additional part-time member. Girls from middle school up can apply until September 10th, and must pass an interview and audition. One successful applicant will join AKB48 until February 2015, earning a 1,000 yen an hour ($10).

It will come as a surprise to exactly no one this is a promotional stunt, specifically for part-time job-hunting company Baitoru.

What may be a surprise to some, though, is full-time AKB members don’t earn a whole lot more. Though AKB48 members’ salaries aren’t officially on record, they’ve been reported by several independent Japanese tabloids such as Nifty, who claimed in 2013 the top-ranking member at the time, Mariko Shinoda, made 50 million yen ($50,000). Sae Miyazawa and Sayaka Arimoto, tied for ninth place in AKB’s ranking system, each made 12 million yen ($12,000). And remember, there are about 129 members ranked lower than them.

Of course, the base AKB48 salary does not include the money AKB idols make for appearing on television shows or commercials, the most lucrative part of the whole idol experience. But only the most popular members get TV and ad deals, leaving those at the bottom with pretty slim pickings.

Potential AKB part-timers, be warned: it ain’t about the money (unless, that is, you’re the boss).