A Devil and Her Love Song vol. 1 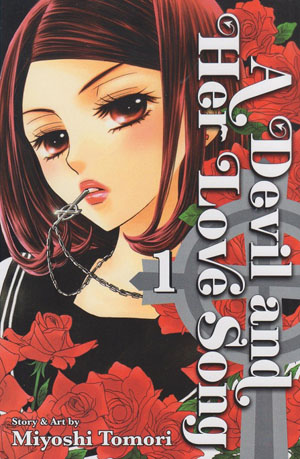 Maria Kawai, the lead character of A Devil and Her Love Song, remains an enigma for the first volume. She’s been expelled from her previous school — for beating someone up, apparently — and at her new high school, she’s quickly the victim of bullying. People think she’s a snob, or worse, a “devil.”  But the truth is, while Maria does have an attitude, she’s hardly devilish and she’s getting a lot of flak for nothing.

Pretty soon we learn that she also has a beautiful singing voice (angelic, maybe?) and an inclination to sing “Amazing Grace,” which is what gives us our title. If you’re thinking this manga is about supernatural evil or otherworldly voices, it’s not… but bullies are pretty evil.

The thing is that Maria seems to bring out the worst in people. She reads them easily and knows things about their personalities that they might not want to tell others or even believe themselves. And her curt way of telling people about themselves isn’t doing a good job of making her friends.

The art is very stylized, namely with how Maria looks. And, yes, manga in general is a very stylized art form, but somehow the emphasis on Maria’s lip gloss, smoky eyes, and perfectly coifed hair make her more doll-like than usual. In fact, in some images she reminded me of a Bratz doll.

As a first volume, it’s a little hard to know where A Devil and Her Love Song is going to go. Will it follow the singing angle? Since we know Maria can sing, and it’s even in the title, it seems as if this will have to get more important over time. Will it be about her problems making friends? Or how about her relationships with the two lead male characters, Shin and Yusuke? Maria is also having a sort of crisis of faith, so I don’t know if that’s something that will be pursued, as well. The first volume kind of feels like it’s attempting to find out for itself what it wants to be, even though Maria herself is so good at getting to the root of things. Right now the art is stronger than the story, but it’s in its early days yet, and Miyoshi Tomori has a number of things going on here that could lead to very interesting storylines.

Virtual Boy 5-3-12: Hangin’ Out and Hangin’ On
Special Dictionaries Help You Name Your Characters