But an on-time release was anything but certain, with the studio completing the film just one week before it was set to hit theaters. 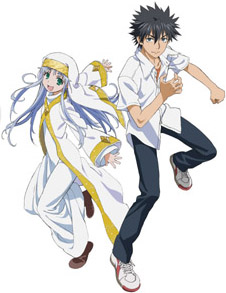 The film, entitled Endymion no Kiseki (The Miracle of Endymion), was directed by series director Hiroshi Nishikiori and written by a certain Hiroyuki Yoshino (Macross Frontier, Dance in the Vampire Bund). The story involves the franchise’s main characters, Kamijo and Index, encountering a new character named Arisa, whose role in the workings of Academy City, and the new space elevator “Endymion,” are initially uncertain.

Certain Lawson convenience stores throughout Japan have been decked out in signage and are offering Magical Index-related merchandise, including posters and certain food items.

Has the world “certain” lost all meaning for you yet? In our case, the answer: certainly.