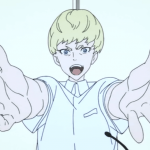 85-year-old anime scenario writer Masaki Tsuji has had his hands in some real classics, including the original 1972-1973 anime adaptation of Go Nagai’s Devilman manga. He didn’t just write a handful of scripts for the series, he wrote 36 episodes out of the 39-episode run, so it’s safe to say he’s an authority on Devilman. He’s also active on Twitter, and he had some recent praise for director Masaaki Yuasa’s new Devilman crybaby anime.

Here’s what Tsuji had to say about the series:

“I have watched DEVILMAN crybaby by its 10th episode. I don’t care about its dramaturgy, such as the 9th episode’s excitement and the 10th episode’s composition. I am speechless for the creators’ sense beyond technique. I envy you, Nagai Go-chan. Your Devilman is breathing in this Heisei era, it makes me so jealous!”

Did you get a chance to watch Devilman crybaby yet? Let us know what you thought in the comments!

Get Wrapped Up in How to keep a mummy Anime’s Cuteness
Mazinger Z: Infinity Anime Film Hits U.S. Theaters in February