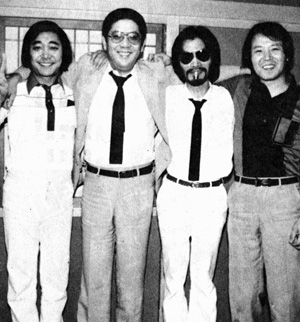 Part Two: Working on the railroad

Ok. I’m gonna do it. I’m really gonna to do it! I’m going to celebrate the 30th anniversary of my favorite anime movie of all time with a series of articles breaking down 1981’s theatrical film Adieu Galaxy Express 999 (you read that correctly) scene by scene and element by element. But first, if I’m going to try and convince that my delusion and mania for this movie are justified, I’ve got to supply some back story on who made this extraordinary anime film, and why…

In the beginning… there was manga artist Leiji Matsumoto. In 1974, he’d gotten his first big break in the anime biz by designing and directing the visual aspects of the seminal Space Battleship Yamato series. After production wrapped on the first season of Yamato in ’75, Leiji decided to take a much-needed vacation. Instead of booking a flight to a sunny beach, he decided to travel alone on an expedition to the wilderness of Africa. Before leaving, someone asked the manga-ka what his next story might be. As Matsumoto told Tim Eldred during a recent interview, “after just one second I instantly answered, ‘the title is Galaxy Express 999. The heroine is Maetel and the boy is Tetsuro Hoshino.’” After numerous adventures in the Savannah plains, including bagging wild game, Matsumoto came back to Japan “full of life and started on Galaxy Express.”

999 initially began as a serialized manga in 1977 in the pages of Shogakukan’s Shonen King magazine. It told the story of Tetsuro Hoshino, a scrappy orphan who travels on an old fashioned space-faring steam locomotive to the heart of the Machine Empire in the hopes of obtaining eternal life via a mechanical body. But by the time Tetsuro and his traveling companion, the mysterious and alluring Maetel, reach their destination, our protagonist has had a change of heart. After meeting many alien species and encountering all kinds of life in extraordinary circumstances, Tetsuro can no longer yearn for the cold and heartless eternal life that the Machine Empire offers. 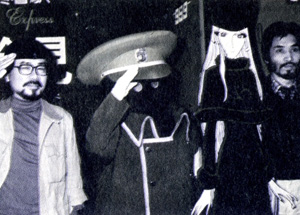 In 1978, Galaxy Express got the anime TV series treatment from Toei Doga in a run that lasted 113 episodes. Arriving at a moment when Matsumoto’s space opera anime like Yamato and Captain Harlock were at the peak of their popularity, the TV incarnation of 999 proved to be just as successful, though the mood of the show tended to more melancholy and contemplative than action-packed.

The summer of 1979 saw an all-new Galaxy Express anime movie released to theaters in Japan. It was a slick retelling of the manga and TV storyline capped off by a now-classic theme song by pop band Godiego (HOUSE). The main team responsible for bringing 999 to the big screen would go on to make Adieu Galaxy Express as well: Producer Yoshio Takami (later responsible for the Fist of the North Star series), art director Kamura Mukuoda, Toei’s top gun animation director Kauzo Komatsubara, and veteran director Rintaro. Their 999 movie was a massive success at the Japanese box-office and was one of the top grossing films of 1979—animated or otherwise.

It didn’t matter that the storyline of the 999 movie didn’t leave much room for a follow-up: Tetsuro and Maetel had destroyed the Machine Empire’s home world and shared a dramatic and tearful goodbye scene together. But the sheer amount of money on the table was probably all it took for Toei to quickly commission a sequel. But rather than phoning it in for a paycheck, the animation staff, along with Leiji Matsumoto himself, would throw their hearts into the work. 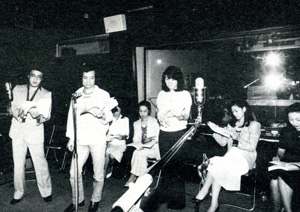 The voice acting cast of Adieu 999 during a recording session.

In July 1980, a meeting was held at the Keio Plaza hotel in Tokyo between producer Takami and Matsumoto to discuss ideas and themes for what was then being called Galaxy Express 2. It kicked off a series of such gatherings, usually held—as was the custom back then—at luxury hotels, culminating in three scenarios written for the film by Matsumoto.

By October, the main staff had been assembled and the production schedule for an August 1981 release was being drafted. Fall saw Matsumoto working on new character designs while Rintaro personally storyboarded the entire film from Hiroyasu Yamaura’s (Ideon, Mazinger Z) script. Winter saw the staff taking a break to appear at a press conference to formally announce the film’s production under its new title Sayonara ginga tetsudo 999: Andromeda Shuchakueki (along with the official English title, Adieu Galaxy Express 999).

Early 1981 saw Matsumoto working on the film’s mecha and poster art. As spring approached, the voice actors—many of them returning from the first 999 movie—had been cast. The background score composed by Osamu Shoji (a jazz musician later to score Cat’s Eye and Wicked City) was recorded at Columbia Records studio in Roppongi, and a series of promotional tie-in deals were set in place. Meanwhile, the animators and main staff began tirelessly working to complete the film in time. 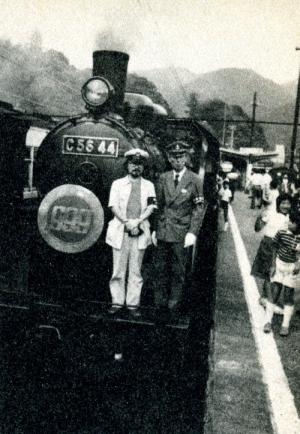 Leiji Matsumoto (L) tours Japan on a souped-up
steam locomotive to drum up hype for Adieu.

Production wrapped on July 21st, complete with a beer-soaked party to celebrate. The next day, Toei’s promotional campaign whipped into high gear as an actual steam locomotive made its away around various cities in Japan decked out in 999 regalia. Using a tactic made popular by the Yamato movies, there was also all night radio special, complete with a 4 hour drama version of Adieu 999 that aired on Nippon Hoso hours before the big opening.

And then, on August 8, 1981, the lights dimmed, the curtains parted, and the greatest anime movie ever made began to unspool…

Up next: Adieu Act One, Scene One