At Hyakkaou Private Academy, a school for the rich, gambling is everything. A caste system separates the high rollers from the impoverished masses, and when bourgeois Suzui loses a game of poker, he drops to the lowest ranks of the school hierarchy and ends up as the personal slave of his opponent, Mary Saotome. All that changes when he meets Yumeko Jabami, a beautiful transfer student. On the surface she’s mild-mannered and friendly, but roll a die or draw a card and Yumeko transforms into a compulsive gambler (a kakegurui) with an insane grin and a sadomasochistic delight in putting life, limb, and mutilation on the line. Dragged along by Yumeko’s risk-taking obsession, Suzui can only watch in awe as she plays games with names like “Voting Rock Paper Scissors,” “Double Memory,” and “Life or Death” against ever more sadistic opponents, with millions of dollars riding on each game! 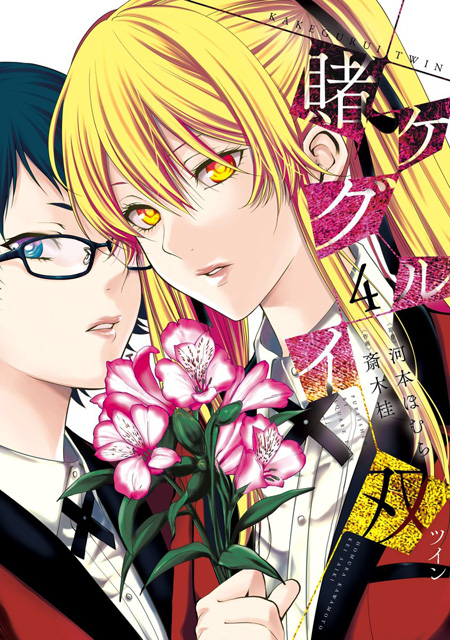 Kakegurui is like the early parts of Yu-Gi-Oh! but with more cruelty, gore, and panty shots. Suzui is little more than a reader stand-in who observes the gambling battles between the other characters, who are almost all beautiful women with improbably short skirts. The script takes stabs at social commentary (“Money always decides the final victor. This rule applies to all parts of a capitalist society!”), including the relatable fear of ending up saddled with crippling debt for your entire life, although the ever-growing amounts of money at stake soon enter an abstract level of hyper-wealth that’s difficult to imagine (“There’s no way you can afford to bet 10,000,000¥ on a game of rock-paper-scissors! You’re crazy!”).

At its base, it’s a familiar but satisfying shonen manga formula, the thrill of seeing the hero pull off last-minute narrow victories through a combination of luck, skill, and a complete lack of survival instinct (“Emotions normal people feel, like attachment to money and the fear of losing it … it’s almost like Yumeko doesn’t feel them at all!”). To say that it’s all a bit too ridiculous and over the top is like complaining that it’s a manga, but it might be more valid to complain about the sexualization and humiliation of the female enemies, or about the jarring goofiness of many of the made-up games; also, the crazy facial expressions of the various psychotic gamblers aren’t quite as good as the artist thinks they are.

Your Name. Theme is Japan’s Most Popular Karaoke Anime Song
﻿OF COURSE There’s a Girl Online!