Yuri!!! on Ice is Chockfull of Memorable Characters and Choreography 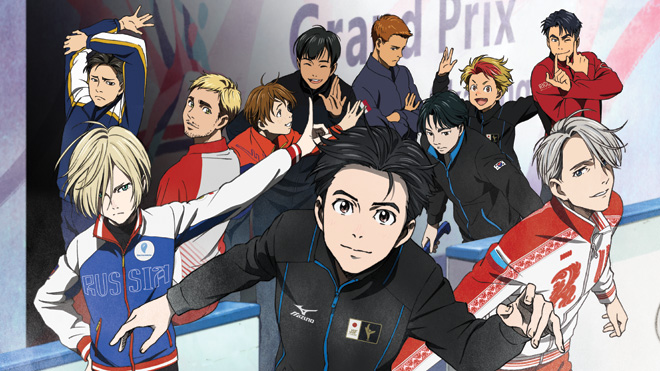 Amid the pressures of being the sole figure skater representing Japan in the Grand Prix Final, Yuri Katsuki gets news from home of his beloved dog’s death. The breaking of that emotional straw, along with the associated lethargy of depression and comfort food ingestion, spurs Yuri’s downward spiral: weight gain, a loss of confidence and drive, subsequent skating competition defeats, and the humiliating return home. The only thing that can save Yuri is something he never expects or thinks he deserves, but that’s exactly what Yuri gets. His figure skating idol, Viktor Nikiforov, catches a certain routine of Yuri’s and decides to become his coach. Together, they aim to qualify for, and win, the next Grand Prix Final.

Yuri!!! on Ice features the directorial and compositional talents of Sayo Yamamoto (Michiko & Hatchin, Lupin the III: The Woman Called Fujiko Mine). As lightheartedly divulged during interviews and panels at AnimeNEXT 2013, Sayo Yamamoto is considered, within the anime industry, to be “the woman you bring in when you need someone to direct sexy female characters” (ReverseThieves.com, AnimeNEXT 2013: Guests). But what about sexy male characters? After all, Yuri!!! on Ice is chock full of them. As it turns out, yeah … she’s completely capable in that field as well. 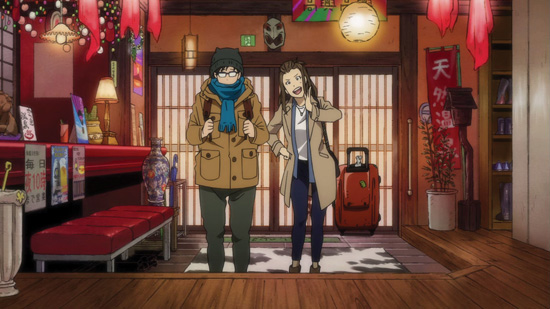 Many might avoid even attempting to watch this series for comparisons to Free! Iwatobi Swim Club, but Yuri!!!… is very different (including the number of exclamation points in its title). Yamamoto uses these pretty boys—flaunting flamboyant skating outfits, sporting training sweats, or bearing it all in the buff—for so much more than to engage yaoi fantasies. (Don’t worry … there’s also a lot of self-aware, good-humored teasing.) Yuri!!!… starts off with the main character having to train his way back to fitness. And while that aspect feels all too quickly resolved, the focus on the body is essential for portraying the emotions during each contestant’s skating routines—the real stars of the show.

As with any visual medium that incorporates performances of an interpretive art, there are multiple stories being told. The figure skating routines are often more dramatic than the plot, but the latter certainly isn’t lacking in emotion for its rise-of-the-underdog tale. The performances punctuating Yuri’s trials deliver an affective punch reflective of his efforts. Aside from being essential to each performer’s growth, the figure skating is absolutely beautiful to watch for all its detail and fluidity (even in the falls and faults). This can also be seen in the OP, which sets the mood of hope through expression via more abstract character designs colorfully skating to “History Maker” by Dean Fujiokia. 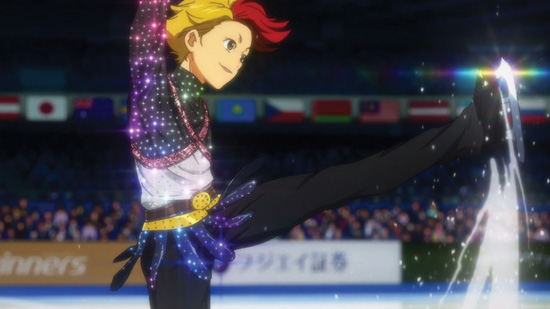 While on ice in the series proper, the main performers often take on an androgynous appearance to feed the show’s substance. Yuri’s evolution in terms of confidence and capabilities is at the core of the plot, but the heart lies in Yuri’s exploration of his feminine side via emotional expression. This is not as heavy handed as it might seem. The theme of his skating competition program is initially proposed as one meant to draw on his major passion. But by turning the focal point of inspiration from food to feeder, Yuri!!!… manages to evoke a love between trainee and trainer that seems at once plutonic, daring, and promising. Gender roles are further addressed via Viktor’s lines of encouragement to Yuri that, at least as translated, imply both skating direction and romantic suggestion.

Off the ice, the range of character designs is a source of great joy. Plumpness is a realistic and welcome trait in its variations between the Yuri of the early and latter episodes; his short, round mother; and the baby fat on Yuri’s old crush’s triplets. Even info dumps are made indispensable via humorous chibi modeling backed by chalkboard exposition. And characters, specifically the older coaches and parents, visually carry their ages to varyingly realistic degrees, while voice actors (VAs) aptly convey diverse ages and maturity levels without stooping to extreme grandpa-ism or grandma-ism. While the Japanese VAs nail emotions at the cost of international homogenization, FUNi’s simuldub offers up distinct dialects at the expense of emotional efficacy. The dub seems off at points, especially early on regarding Yuri’s emotional trauma, but caricatured Russian accents appropriately enhance the hamminess. So watching the sub and dub seems mandatory, here, to reap a melding of intentions. 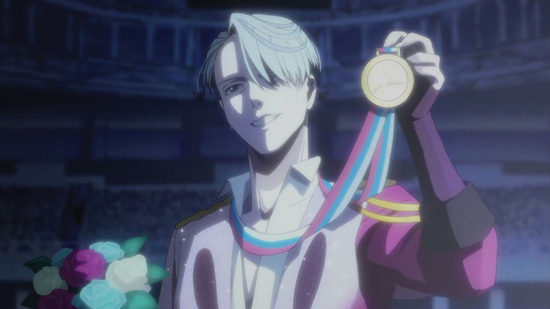 Visually, simulcast production issues have been noted by many … which is a shame. The combination of studio MAPPA and director Sayo Yamamoto would be a fan’s slashfic dream if the studio could focus the all of its capabilities on one show. However, MAPPA, a relatively small but very impassionate studio, is also concurrently working on the soccer anime, Days, and that division of effort might stretch resources a little too thin in relation to Yuri!!!…’s simulcast. Despite this, each episode is a resplendent watch so long as you focus on the overall story instead of sweating some of the finer (and more blatant) visual discrepancies—all of which should be fixed and perfectly pretty for the home video release.

Like Viktor’s unexpected arrival at Yuri’s home, so a new Sayo Yamamoto title graces anime audiences’ screens. Yuri!!! on Ice is a series that speaks to, as competent fiction should, a few issues without seeming to do so. As one of those rare bridges, viewers from various corners of anime fandom should be able to access and thoroughly enjoy, without much effort, this wonderful story of two people with a shared passion for figure skating and a growing affection for one other. To what degree? That’s up to viewer enthrallment to reveal. Regardless, Yuri!!!… is an excellent addition to Yamamoto’s repertoire. The series showcases her storyboarding talents just as much as it does her layered writing. While Yamamoto may not be out to change the world with this piece, she’s definitely going bring some outlying corners together via some masterful choreography.

Yuri!!! on Ice is available from Crunchyroll and Funimation.