Your Name is a Dazzling, Heartfelt, and Emotional Tale

Love, Time, and other Dimensions!

There are some anime theatrical features in the world that downright refuse to be ignored. They’re the classics that are immediately rattled off to anyone who says that anime has never produced anything of substance, anything so breathtaking that it must be viewed 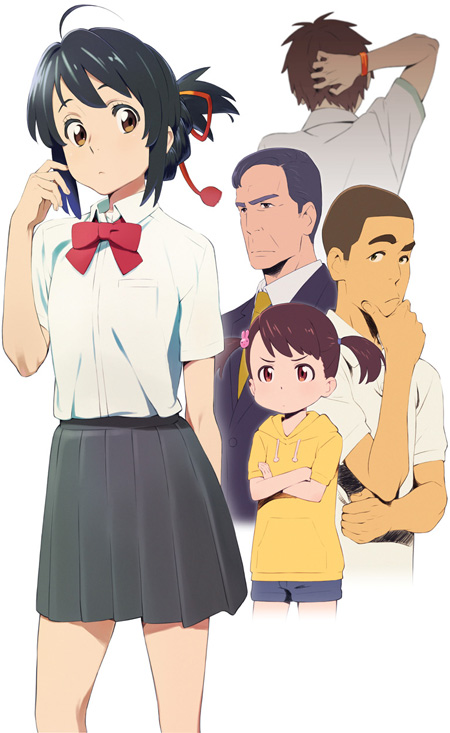 several times, or that there’s nothing to the art form—all opinions from anyone who’s never seen movies like Princess Mononoke or Akira, or even Ghost in the Shell. There’s a special place in our hearts for these movies that keeps them at the forefront of our minds, Your Name is a dazzling, heartfelt, and emotional tale from director Makoto Shinkai that weaves a gripping tale of a relationship that stretches across time and dimensions. It’s the story of a young male and female high school student duo, with one living in rural Japan and the other in bustling Tokyo. After the two begin to swap bodies seemingly at random, they kick off a cosmic chain of events that could end up in tragedy if they don’t take the right steps to stave off a possible disaster.

The film has made an undeniable impact everywhere it’s been shown, rising to become the fourth highest grossing film of all time in Japan and the fourth highest grossing non-English film in the world. It’s won several prestigious awards, and there’s even a live-action Hollywood remake coming down the pipeline. In short, it’s a cultural phenomenon, an anime masterpiece, and the next film you need to experience. 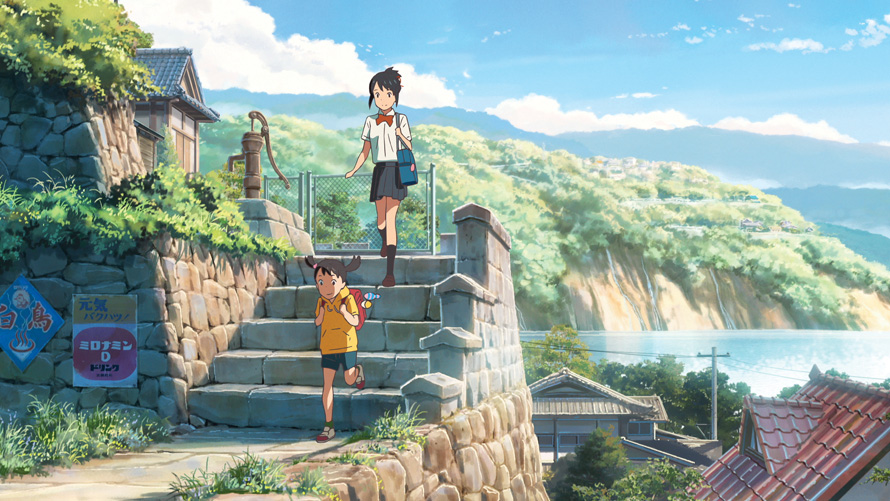 Your Name introduces audiences to two very interesting lead characters in the form of Mitsuha and Taki, two very different individuals. Mitsuha is a high school student who resides in the Hida region of Japan, where she lives with her best friends Tessie 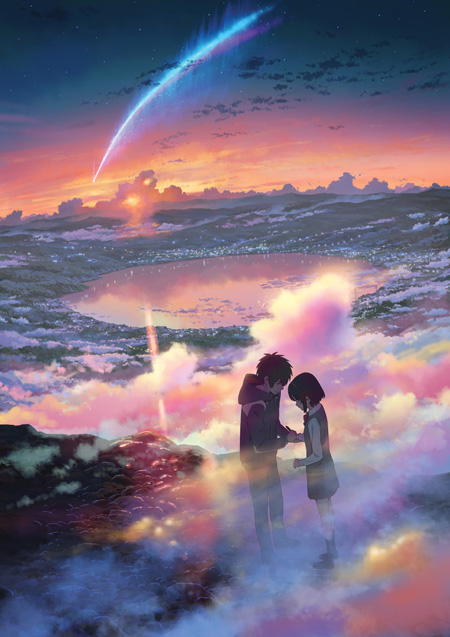 and Sayaka. Despite the seemingly idyllic circumstances in which she lives out her life, she’s not exactly thrilled to be living it. Her dream is to be a popular high school boy in her next life, and a life spent taking care of the family shrine isn’t one that she’s too keen on leading—and who would be? She’s a young girl stuck in the middle of the country with big city dreams, unsure of how she’s ever going to make it and make something of herself.

That all changes when she magically begins swapping bodies with another high school student named Taki. Mitsuha’s life is mired in the past, while Taki is very much living the life of the more idealistic and “expected” teenage boy.

Taki’s life is a lot less dramatic, but full of the everyday concerns that teenage boys tend to have. He lives in the big city, Tokyo to be exact, and enjoys the modern conveniences that come with being a teenage boy in a metropolitan area. He’s got a job and a raging crush on one of his co-workers, but can’t seem to bring himself to do anything about it. He’s a nice guy who has his own downfalls just like Mitsuha has. And then, like Mitsuha, one day he discovers he’s swapping bodies with another human being. That can’t be right … can it?

The two teens aren’t quite sure what’s going on at first, because how feasible is it that you’ve suddenly been living in someone else’s body for a little while? They believe that they are dreaming. After waking up after several bizarre “dreams,” neither teen can 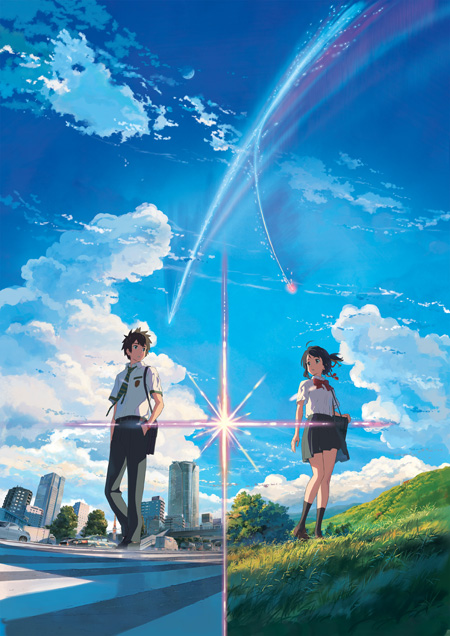 really understand what’s going on and why they continue to seemingly occupy the mind of another. When it finally clicks between the two, the order of the day is communication. They have to work it into their lives when they’re not able to directly communicate directly or remember everything the other did while occupying their body. Cell phone usage is a pretty important crutch, as is writing notes on the other’s body.

Your Name truly shines as it deftly weaves a believable set of circumstances surrounding Taki and Mitsuha’s actions as the other person. So many movies would be keen to explore only the physical notions of a man and a woman swapping bodies, and fortunately Your Name keeps it poignant, spotlighting how one personality can help better the other. Mitsuha helps Taki out when it comes to securing a date with his crush, and Taki helps Mitsuha become a more outgoing, popular student at school.

These aren’t the only improvements one teen makes on the other’s life. The rest of the influences ripple together into a fascinating river until you realize they’re slowly making these minor improvements in an effort that rivals something like love. This is a major plot point in several different ways, mainly because you’re going to want to have a box of tissues nearby right around this point. 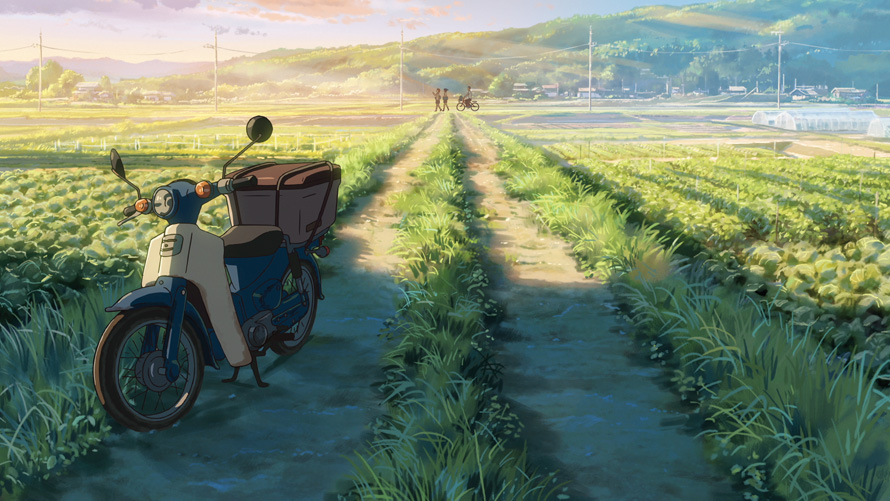 After you realize how close Mitsuha and Taki have become after switching bodies for some time, the film takes an important and dramatic turn that certainly shouldn’t be spoiled for any new viewers since it leads to an important bit of drama to the film, hitting fans like a ton of bricks. It’s an integral pivot that brings everything together in one of the most pulse-pounding climaxes seen in the past few years in anime films. By the movie’s ending, you’ll either be crying tears of joy or longing for an interdimensional relationship like Mitsuha and Taki’s.

So if you’ve been wondering what the hubbub is all about and if Your Name could possibly be worth all the attention that’s been lavished upon it, know that it’s absolutely worth your time. But be forewarned: When you watch it and finally understand its brilliance, you’re never going to be able to forget you’ve seen it to take it all in again. That’s the curse that comes along with masterpieces, after all.

Your Name is available from Funimation.