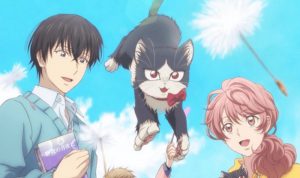 In what may be one of the more inspired promotions of late, voice actor Kenshō Ono (Tetsuya Kuroko in Kuroko’s Basketball) has been visiting a very appropriate location to hype up the My Roommate is a Cat anime, in which he voices Subaru Mikazuki. The series is currently airing, so Ono has been hard at work appreciating cats in a new way at an Akihabara-based cat café.

Avex Pictures started sharing the ongoing “Cat Tour Movie” series on YouTube, so stay tuned for more fun in between episodes of My Roommate is a Cat. Here’s what Ono has been getting into thus far:

My Roommate is a Cat adapts the manga—known as Dokyonin wa Hiza, Tokidoki Atama no Ue. in Japan—written by Minatsuki and illustrated by As Futatsuya. The Kaoru Suzuki-directed and Zero-G-produced series is currently streaming on Crunchyroll, which describes it like so:

The story of Mikazuki Subaru, a novelist who is shy and struggles in relationships with other people, and a cat who was dumped by humans and lived a tough life on the streets. Through a twist of fate, the two of them end up living together. This heartwarming tale illustrates day-to-day life through the eyes of both man and cat. These moments seem trivial, but as they build upon themselves, the two become family and find happiness in their life together.