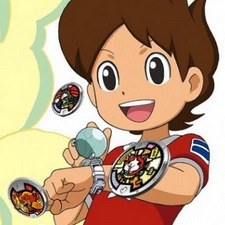 Level-5’s Yo-kai Watch games are a huge multimedia hit in Japan, and they’re starting to make their way over to the states in various forms. One such form is the manga adaptation, which is coming to North America as part of VIZ Media’s Perfect Square imprint this September.

The Yo-kai watch manga is written and illustrated by Noriyuki Konishi (Mushiking: King of the Beetles, Go-Go-Go Saiyuki: Shin Gokūden) under the guidance of the Level-5 team responsible for the hit games. After the September debut, subsequent volumes of Yo-Kai Watch will be published on a bi-monthly basis.

Nathan Adams is just an average kid until the mysterious Whisper gives him a device that allows him to see what others cannot, Yo-kai of all shapes and forms! Now, armed with the Yo-kai Watch, Nathan, Whisper and their new invisible friends embark on an all new supernatural adventure!