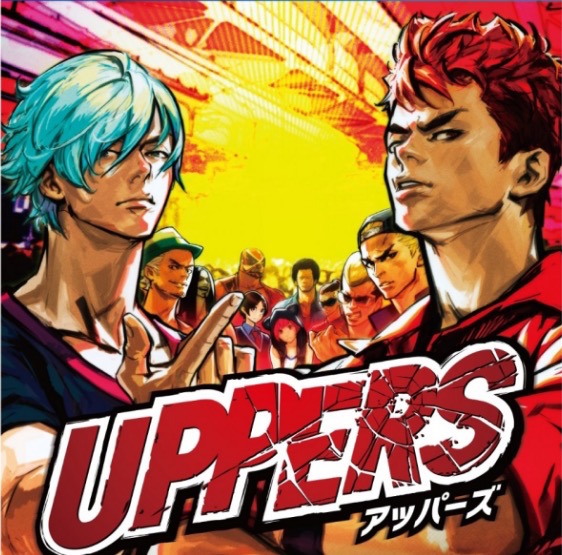 When I first started playing Uppers, a few specific moments pushed me right into recommendation mode. Apparently all it takes to get me excited is the ability to dunk punks into manholes and uppercut them into helicopter blades, and Uppers offers those activities and much more by the bucket. There aren’t many beat ’em ups to speak of on PS Vita, so even if they don’t end up bringing this one over here, you’ll find plenty of reasons to put forth the extra effort to import the over-the-top delinquent action of Uppers.

Uppers has a few things in common with the Kenka Bancho series, which also has a penchant for focusing on battle-starved dudes with ‘tudes (and really cool hair… and 300% more stare-down eye lasers). The story in Uppers offers a much better excuse for fighting than a school setting, though. You see, Uppers takes place on an isolated island appropriately named Last Resort Island. This is THE place for anyone who loves to beat people up, because there are absolutely no consequences no matter what happens. Feel like hurling some dope through a brick wall? Go for it! Do those explosive barrels look like the perfect target for a well-placed body slam? Why not? 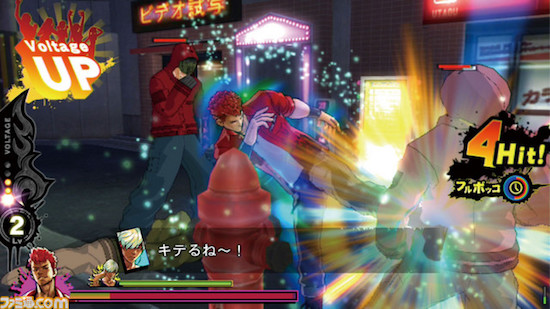 There’s a pretty standard set of normal fighting moves available from the start—including a meter you can fill for a show-stopping smackdown—but the real meat of Uppers‘ missions comes in the form of all the throwable objects and context-sensitive attacks. You might see a large blue circle on the floor in front of some gates, for instance. Throw an enemy while standing in that spot and you’ll chuck him way up into the electrified sign above with a bone-rattling BAZZAT. Uppers is at its best when you’re taking out full groups with a nicely-timed toss of a motorcycle. It only really drags when enemies are spread too thinly throughout a stage, or when a couple of them get snagged on an upper level, causing you to waste the time it takes to circle back around and finish the job.

As you fight you’ll also be attempting to impress scattered groups of girls who hoot and holler throughout combat. Bring the fight closer to them and fulfill their enthusiastic requests to snag bonuses, including Panty Slots, in which you try to match the color of three flashing girls undies. Yep, in case you didn’t know it already, Uppers comes from producer Kenichiro Takaki, known for his work on the Senran Kagura series of busty ninja games. While he’s certainly up to some of his old cheeky tricks here, Uppers isn’t all that embarrassing to play. It’s mostly about hot-blooded action and granting your wish to be the violence king of the streets. 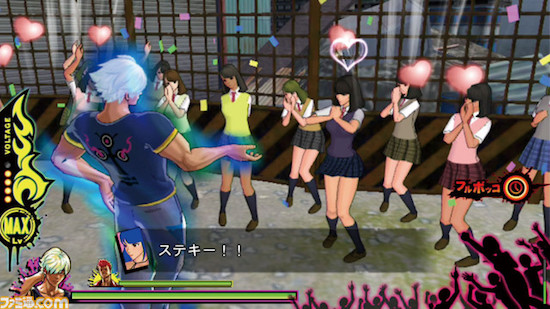 The more stages you beat, the more locations, playable characters, and allies you unlock. It’s a straightforward system of progression, but it does have a couple things holding it back. At certain points you’ll need to up your approval percentage to a certain level before you can move on to the next set of missions. This typically just involves replaying older missions, and while it’s nice that you don’t have to best your original ranking to move the meter, it’s still kind of a chore and only serves to bog down the pacing.

Beyond a few hiccups like that, Uppers is a really enjoyable beat ’em up with solid music, colorful and clean visuals, and enough exciting special moves to keep you looking forward to each new location on Last Resort Island. At the time of this writing it still hasn’t been confirmed for localization, but English trophy information recently surfaced, and Takaki previously said he would love to bring it over. If you can’t wait for that possibility, Uppers is totally playable in import form. You’ll miss out on the story if you don’t know Japanese, and some basic reading skills help with the menus, but otherwise you’re good to go. Now, if you’ll excuse me, I need to go back to the school gymnasium to literally dunk some two-bit twerp into the basketball hoop.