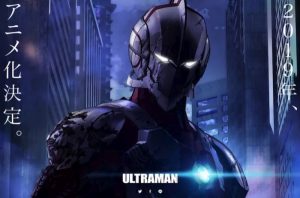 Eiichi Shimizu and Tomohiro Shimoguchi’s Ultraman manga is getting a CG-animated anime adaptation, and the latest compiled volume has more info on the timing. The series is coming to Netflix, which currently has it lined up for a simultaneous worldwide release in spring 2019.

Kenji Kamiyama (Eden of the East) and Shinji Aramaki (Appleseed) are directing the anime, with production being handled by Production I.G. For those who haven’t read it yet, here’s how publisher Viz Media sets up the story:

Decades ago, a being known as the Giant of Light joined Shin Hayata of the Scientific Special Search Party to save Earth from an invasion of terrifying monsters known as Kaiju. Now, many years later, those dark days are fading into memory, and the world is at peace. But in the shadows a new threat is growing, a danger that can only be faced by a new kind of hero – a new kind of Ultraman…

Shinjiro is an ordinary teenager, but his father is the legendary Shin Hayata. When he learns that his father passed on the “Ultraman Factor” to him, and that he possesses incredible powers, nothing will ever be the same again.