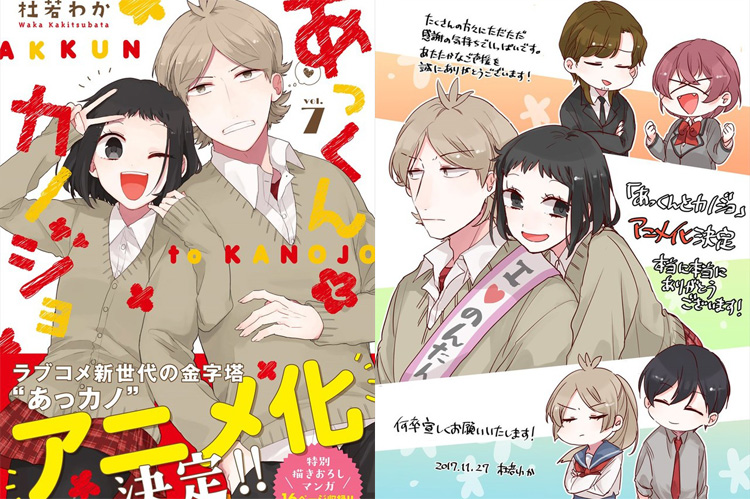 Akkun to Kanojo (Akkun and His Girlfriend), a popular shoujo manga, will be getting an anime adaptation.

The announcement came via the 7th volume of the manga, which is written by Waka Kakitsubata.

Akkun to Kanojo centers around the relationship between the tsundere Atsuhiro “Akkun” Kagari and his girlfriend Non “Nontan” Katagiri. Akkun appears to be disinterested and even harsh toward Nontan, but he’s secretly madly in love with her. Meanwhile, Nontan, oblivious to Akkun’s true feelings, finds his abrasive attitude charming.

No date, cast or crew have been announced for the anime version yet, but a drama CD based on the manga was released in December 2016, and starred Jun Fukuyama (Mr. Osomatsu) and Yuuki Aoi (Shobitch) as the two main characters.

Akkun to Kanojo has been published in Kadokawa’s Monthly Comic Gene since 2013.

In a tweet, author Kakitsubata thanked fans of the manga for their support and said to look forward to more news about the anime.