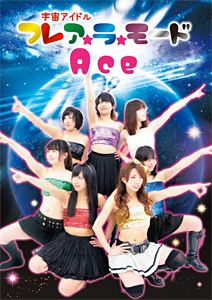 Tokyo police have filed charges against an idol group for performing a concert outside Shinjuku station, one of the city’s major traffic hubs, according to Tokyo Reporter.

The offenders, Flare-La-Mode Ace, are an idol group made up of seven women 18 to 26 whose theme is “idols from outer space.”

For idols, these girls showed a surprisingly punk attitude. When previously warned about violations by the police, the manager of the group “indicated the shows would continue.” Badassery or stupidity?

How big are Flare-La-Mode Ace? Well, not huge, to put it mildly. This is probably the first most people have heard of them (making you wonder if the whole getting in trouble thing isn’t some kind of ill-advised publicity stunt). Still, they seem to have played shows in Nagoya and as far as Taiwan. Now-huge idol groups like AKB48 and Perfume began playing shows on the streets, cultivating passionate fans before moving on to bigger venues.

Will the group survive this brush with the law, or be forced to return back to outer space? Ganbatte, Flare-La-Mode Ace!