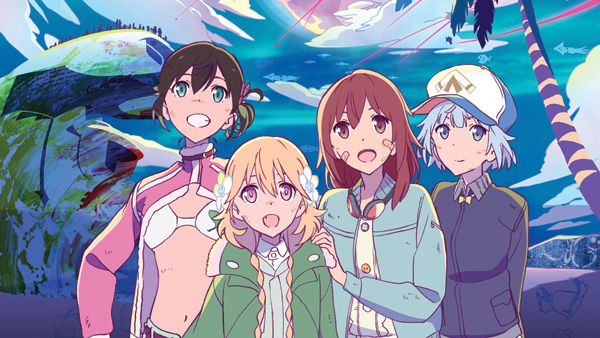 The Rolling Girls takes place in a not too distant future, wherein a power vacuum stemming from the fallout of the Great Tokyo War leaves Japan divided into its original prefectures. Each region grows rapidly but inwardly according to its defining characteristics, and that egotism fosters prideful isolation. Interregional clashes start to occur soon thereafter, and any conflict determined to be irresolvable by diplomatic means necessitates, by issue of a law known as the Twin Tower Declaration, the involvement of representative vigilante groups headed by superhuman power-wielding “Bests.”

The main story, however, follows a girl (Nozomi) who sets out to fulfill some outstanding requests for her region’s Best (Maccha Green), who is recuperating from a battle with another Best. On the way to the first requester (Chiaya), two other girls sign up to take on the task of collecting Moonlight Stones (the source of the Bests’ powers). This setup reveals the true nature of the series, which is a travel diary of sorts about four girls rolling, falling, and scrambling through the other regions for others and themselves while growing as individuals and as a group. 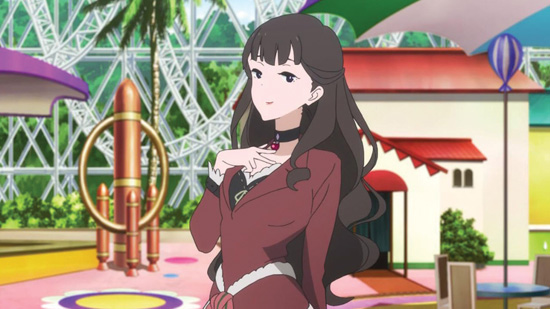 The bond between members is fragile at first; each has her own agenda and rationale for undertaking this journey. Nozomi is trying to maintain Maccha Green’s legacy as a peacebroker, Yukina needs to soothe her troubled heart, Ai wants to tag along to get her own Midnight Stone and become a Best, and Chiaya is personally seeing her request through while enjoying the ride. Outright clashes between these four are few, but a solid tension between Nozomi and Ai as well as the atmosphere it creates and how that affects all the girls is a pretty on-point portrayal of how actual friendships form and play out.

The story is told in four arcs, which means viewers stay an average of three episodes per destination. (Kino would be so proud!) The Nagoya, Kyoto, and Hiroshima arcs are the strongest, which basically only leaves the opening arc as a largely introductory affair necessary only for characterization and exposition. But the show’s bright colors, astoundingly fun animation, and anything goes attitude mean story comes second; this show is, appropriately enough, about experience. That’s a good thing, because for all of the emphasis on the titular mob, what really matters are the places they visit and their inhabitants. 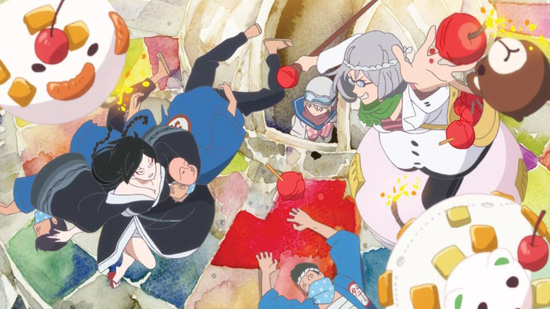 Each prefecture feels like a new world and looks like a moving painting. Backgrounds take on the feel of color pencil and watercolor with hues, abstractions, and compositions that skillfully set tone and inspire pause for appreciation. Fight scenes, whether it’s a street duel via motorcycle, a guitar wielded like a medieval axe, a dragon fist in the face of 1,000 rocket Buddhas, good ol’ fisticuffs, or so much more, are lively, inventive, and closely followed by the camera with some great angles. This is Wit Studio (Attack on Titan, Hozuki’s Coolheadedness) as its innovative best, and all the visual splendor is complemented perfectly and energetically by some equally fantastic music.

Ari Ozawa, Rina Hidaka, Risa Taneda, and Yumiri Hanamori voice the four main girls and sing covers of songs from the Japanese punk band The Blue Hearts for the show’s main theme and soundtrack. Sadly, the English dub does not do the same with its voice cast for the opening song or soundtrack. But on a bilingual bright note, Mai Tanaka and Brina Palencia, who voice the same character in the Kyoto arc of their respective Japanese and English releases, cover a The Blue Hearts song in what is arguably the best sequence in the 12-episode series. But the unsung hero of the show is Masaru Yokoyama, whose backing score, which includes myriad tweaked instrumental takes on The Blue Hearts songs, is simply incredible for its versatility in tone and energy. 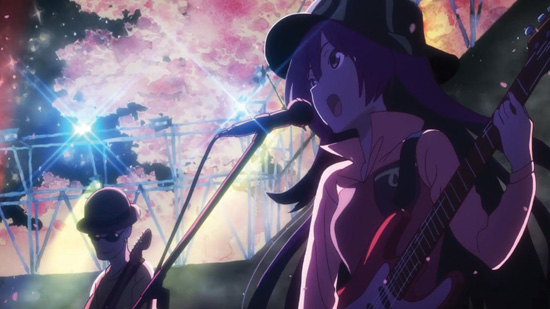 But all is not flash, action, and noise; growth through shared and individual experiences along their travels bring some legitimate tenderness to this traveling mob of “Rests” (anyone in a vigilante group that supports their region’s Best). Small moments – a restrained head pat, nods of approval so slight that only some subtle softening of characters’ features betray their intended emotion, etc. – amid the clamor also bring the humanity home. Contrast between emotional battles within and betwixt individual members of the core cast and the situations surrounding them smooths out as arcs pass and the girls become more of a cohesive group than loners on the same tour. And by the end of the final episode, that grown bond is a solid tearjerker.

Other than series sequels, The Rolling Girls is director Kotomi Deai’s first time in the main seat; it’s a good fit. While not a complex series, there is certainly a lot going on at any given moment, and yet the show doesn’t end up an absolute mess at the end. Instead, stories within stories and all their associated visuals are efficiently interwoven to get the most impact via association. Some of those tales are a little more out there than others, but the anything goes ethos forces a raised white flag of suspended disbelief from the audience’s head. This series isn’t good because its premise and setting get a blank check, however. The show is good because of all the signatures on the bottom line and all the hard work of their representative hands and minds. 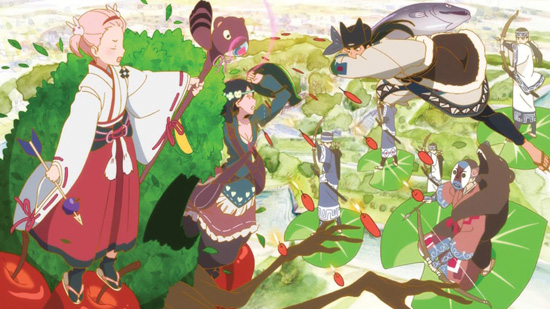 The Rolling Girls is a visually engrossing road trip serial with a good deal of heart to match. That the series uses external conflicts in arc-sized portions to help explore and shape the interpersonal and intrapersonal conflicts of Nozomi, Yukina, Ai, and Chiaya, and that it does so well and with so much fun, lends to a story of stories that can be watched again and again. I’d strongly recommend picking this one up. And if you like series that explore worlds through a central character, be sure to check out Kino’s Journey (which coincidentally also involves a roaming girl on a motorcycle) and read Italo Calvino’s Invisible Cities.