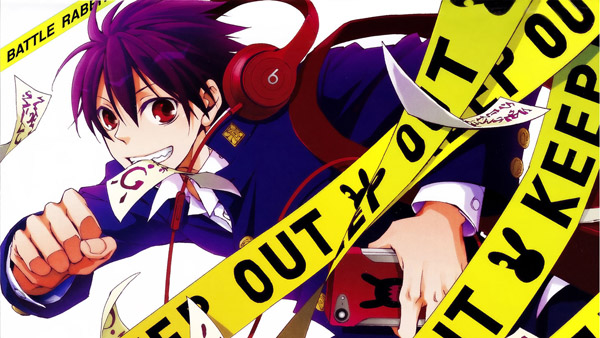 In Japan, they don’t have
the “man on the moon”—in
its place is the “moon rabbit” or tsuki no usagi, best known by anime fans for inspiring the punny name of Usagi Tsukino in Sailor Moon. In Battle Rabbits, a manga by story/artist duo Ameichi (07-Ghost), the moon doesn’t just look like a rabbit; it’s populated
by aliens called Battle Rabbits who defend
Earth from intergalactic invaders!

Our hero Kaguya hews pretty closely to the modern anime template:
a sullen teenager whose father was killed by a “demon.” But when he gets on
a strange bus one day, a girl named Mao dressed in rabbit-themed robes reveals that he is the leader
the Battle Rabbits have been awaiting for 1,200 years
and proceeds to move in with him (of course).

As their leader, Kaguya must fight back against “ogres”: aliens that feed on negative human emotions in the form of little pieces of imaginary candy, and it turns out the demon who killed his dad was one of these ogres. The references to Japanese mythology like moon rabbits and ogres isn’t accidental—the Battle Rabbits are essentially a sci-fi version of onmyouji, the famed Japanese scientist-sorcerers known for their exorcisms.

On its face, there’s nothing too unique about this setup, since anime and manga have been going back to the well of “kid has special powers and fights monsters who feed on negative emotions” for decades now. What’s interesting is that Ameichi plays it like a male twist on the magical girl genre rather than a typical light novel story, complete with a peculiar fascination with twee imagery like rabbits and candy. Unfortunately, this twist doesn’t 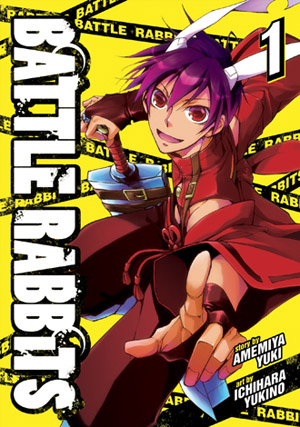 Thankfully, Battle Rabbits doesn’t disappoint in terms of visuals, combining high-contrast artwork, expressive, angular character designs, and rabbit-themed costumes reminiscent of the designs in 07-Ghost and traditional onmyouji robes. This is a josei manga after all, so there are a lot of pretty-boy characters, but thankfully the female designs get some attention as well.

Battle Rabbits feels like an awkward halfway point between a “magical boy” series and a male-targeted light novel, but the first volume never escapes the archetypes of those two genres. It’s a perfectly serviceable series, but if you’re looking for supernatural action or pretty boys, there are many better options out there.