The Next Generation: Patlabor Episode 1 Review 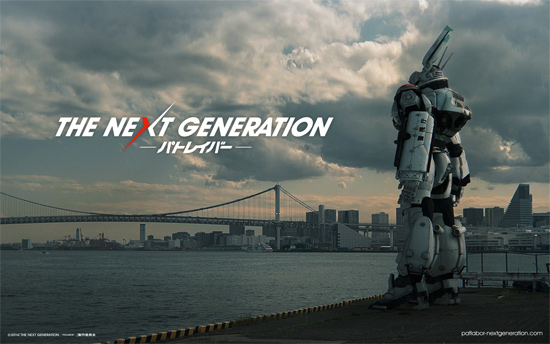 What is it about adapting anime to live-action producers find so compelling?

The most obvious answer is eyeballs. Live-action adaptations of anime or manga have the possibility to attract mainstream audience members who otherwise avoid anything anime-related (yes, there are plenty of those people in Japan, too).

Another reason: nostalgia. Japan now boasts multiple generations of 30 and 40-somethings who might no longer have the free time to soak up an entire season of anime or multiple volumes of manga, but can spare a few hours to see their favorite characters portrayed on the big screen.

Neither of these reasons, though, really explain the existence of The Next Generation: Patlabor. The source material, though popular, isn’t an instantly recognizable title like, say, Lupin the Third or 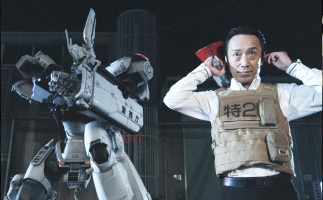 Kiki’s Delivery Service, two properties which have also received live-action adaptations. And it’s hard to see a mainstream audience sticking with TNG: Patlabor’s strange release format, in which multiple TV-length episodes will be released theatrically and on video throughout the year, leading up to a full-length film in 2015.

Add to that the fact the project is helmed by none other than the director of the original Patlabor anime, Mamoru Oshii, whose live-action films have never exactly been blockbusters.

So when it comes to why this project exists in the first place, your guess is as good as ours. Perhaps Oshii, having gone as far as the medium allowed on Patlabor 2, felt the only way to continue to explore the Patlabor universe was through live-action. Maybe someone just wanted to build a life-size Labor (can’t fault them there, if we had the cash we’d probably do the same thing).

The Next Generation: Patlabor is about just that: the generation of Labor pilots, crew and technicians who took the place of the original 2nd Special Vehicles Division. The only remaining member of the original team is Shigeo Shiba (“Shige”), played in a bit of brilliant casting by his original voice actor, Shigeru Chiba. Shige, once second-in-command of the mechanics division, is now in charge and equally esteemed and feared by the junior mechanics. 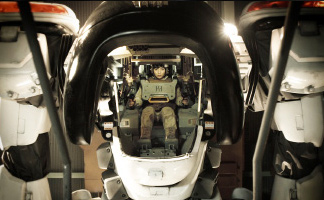 One of the most unique parts of the original Patlabor (especially the TV series) among giant robot shows was its true-to-life portrayal of police work as extremely mundane, with hours of boredom punctuated only rarely and briefly by moments of excitement.

TNG Episode 1 stays with and expands on that theme. Life at SV2 headquarters consists largely of playing video games, eating cup ramen, obsessively checking the news, and ordering lunch from the local Chinese restaurant (a scene in the episode basically rehashes the SV2 vs. restaurant episode from the anime series). Twice the Labors are called up to deal with incidents that end up getting settled by the local police before the team even gets out the door.

The Patlabor anime series was also unique in portraying near-future Tokyo as essentially the same city the animators were living in, with the addition of giant robots not as miraculous, futuristic technology, but tools, like advanced versions of cranes and dump trucks. In a very meta way, this works for the live-action series perfectly. In TNG, too, Tokyo is just Tokyo – the SV2 is located in a nondescript hangar, the Labors have plenty of scrapes and scratches, and computers are seen running Windows XP (that Microsoft recently ended support for XP is a bonus; SV2 using an outdated OS is almost too perfect). 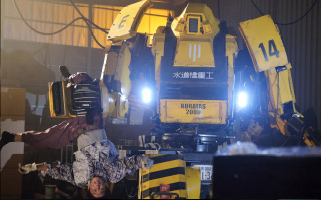 What doesn’t translate so well to live-action, though, are the jokes.

The humor in TNG is best described as “broad.” Most of the punchlines involve the team descending into screaming matches, leering at each other with puffed-up, red faces or wrestling on the floor of the hangar.

One could argue about how effective jokes like this are in animated form, but they fall especially flat in real life. Actors contorting their faces, rolling around and screaming in an attempt to look like anime isn’t funny, it’s simply off-putting.

And there’s the CG. In the final few moments of the episode, when the SV2 finally deploys, we see the AV-98 Ingram Labor, which heretofore has been a beautiful, unmoving physical model (again, kudos to the team for having actually built the thing) turn into an awkward CG model that sure as heck isn’t fooling anyone. That was to be expected: the budget for this series is minuscule compared to an American series – and we hope they’re saving their best stuff for the 2015 film – but it’s a bit disappointing anyway.

After one episode, the jury’s still out on this Patlabor project. While the world of Patlabor is in some ways ideally suited to live-action, Oshii’s broad humor just doesn’t work, and so far the characters haven’t done much to seem like anything but stand ins for the first generation.

Thankfully, like a Labor on a flatbed, there’s still time for this series to find its feet.