The Enduring Legacy of Initial D and the AE86 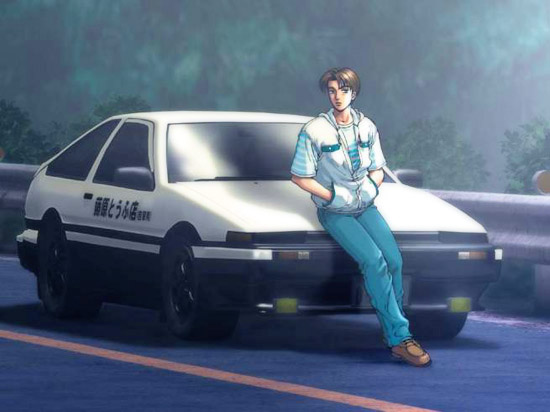 When Toyota designers and engineers were toiling away on the fifth generation Corolla coupe, it’s unlikely that they would have guessed that their humble car would become the cultural phenomenon that it did. Two decades later and the legacy of that humble car, otherwise known as the AE86, lives on: Initial D Fifth Stage is currently airing in Japan and Toyota recently came out with a brand new sports coupe, heavily inspired by the 20 year old coupe, called the FT-86.

Thanks to the complexities of the Japanese automotive retail environment, the AE86 was originally released under two different names, sold under two different Toyota sub-brands. The Corolla Levin had traditional headlights, while the Sprinter Trueno had the iconic pop-up headlights that became famous thanks to its inclusion in Shuichi Shigeno’s Initial D manga. Functionally, both the Levin and Trueno were identical, the only thing that differentiated them was the headlights, taillights and badging. Both versions with the high-revving 1.6 liter 4AGE motor that also found their way overseas in the Corolla GT-S, the U.S. version of the AE86. Like the Japanese version, the GT-S was offered in both notchback and hatchback styles, but only with pop-up headlights (and oddly, paired with Levin taillights).

Despite some motorsports success in impressive competitions like the Paris-Dakar Rally and Australian Touring Car Championship, the AE86 wouldn’t really come into its own until the 1990s, when it became the poster-car for a new fad called “drifting.” Pioneered by mountain hooligans and eventually taken to the track in competitive events, drifting is the act of sliding a car around corners. This is accomplished by breaking traction in the rear tires, in effect requiring drivers to maintain control of their car on the brink of uncontrollability. 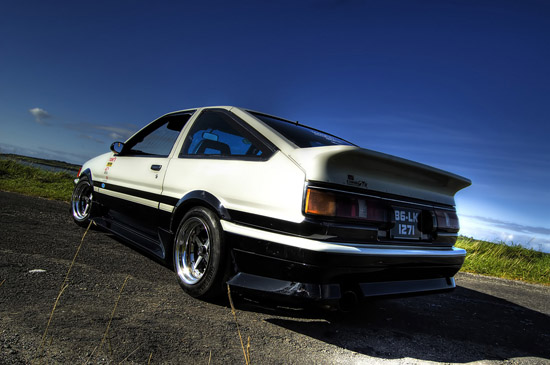 Initial D was a shonen-ized take on those drifting mountain hooligans, aping the popular style of boys manga and dropping it into an automotive setting. Each story arc sees our hero (in this case, high school student slash tofu delivery boy Takumi) face a new challenger and defeat them with a new technique or strategy. It’s the basic formula that has worked for decades in manga, but with kung fu fighting replaced by shredding tires. Like most popular manga titles, Initial D soon received an animated adaption, airing on TV in 1998. Despite some particularly dire computer animation, Initial D managed to achieve success both in Japan and overseas, particularly in in the U.S. where digital fansubbing and distribution was starting to take off in the early 2000s.

The import car scene in the U.S. was gaining traction around this time, fueled by recent release of The Fast and The Furious and the low prices on reliable-yet-sporty Japanese cars of the 80s and 90s. Heavily influenced by the trends in Japan, car guys in the U.S. took up drifting and Initial D achieved a surprising amount of popularity among young car enthusiasts who wouldn’t otherwise be interested in anime.

The direct result of this was that cars featured in Initial D, and particularly the AE86, began climbing in price, with cars trading hands at values far exceeding the actual estimated values. Among enthusiasts in the U.S. this came to be known as the “Takumi” or “Initial D” tax, coined for the hordes of young teenagers rushing to buy the car they saw in a cartoon they liked and driving up the price. Even today, nearly a decade later, these inflated prices remain thanks in part to the piles of cars sent to the junkyard by over-enthusiastic young drivers trying to emulate techniques they saw in Initial D. 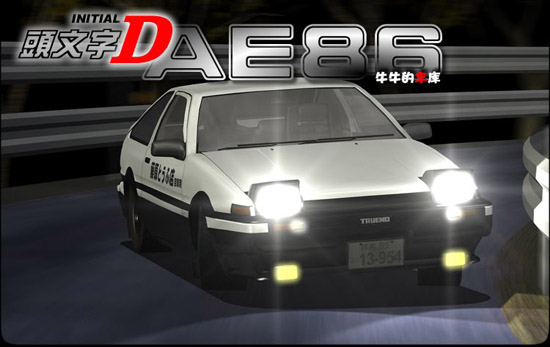 Meanwhile in Japan, the AE86 was arguably at the peak of its popularity. A healthy aftermarket industry kept AE86 owners tinkering and modifying their cars, while popular car video-series like HOT VERSION featured the car extensively. Numerous magazines and “mooks” (Japanese publications that are somewhere between a magazine and book in size) were released that focused on the AE86, creating a healthy market for AE86 goods and related paraphernalia.

Today, the AE86 is still popular, but not like it once was. In Japan they command high prices, but aren’t a dominating trend in the automotive community. In the U.S. they’ve fallen out of favor with would-be drifters who have turned to other rear-wheel drive Japanese cars that are capable of making more power, but a dedicated AE86 community still exists.

Most notably it’s Toyota that finally took notice of the popularity of its last rear-wheel drive sport coupe and took the strengths of the AE86 (fun to drive, light weight, cheap) to the drawing board when they began planning their newest sports car, the FT-86. Released in the U.S. as the Scion FR-S, the FT-86 struck a balance between cost, power and weight that makes it an interesting alternative in a market that has decidedly turned towards heavier cars with more horsepower. At the unveiling of the FR-S in the U.S., Toyota even went to the length of having a couple of AE86s on hand to demonstrate both the influence on the new model as well as the legacy of the Toyota sports coupe tradition. Further than that, Toyota tapped American aftermarket company Five Axis to create a special version of the FR-S in the AE86’s iconic two-tone paint scheme, including the so-called “panda” combination of black and white that Takumi’s car sported in Initial D. 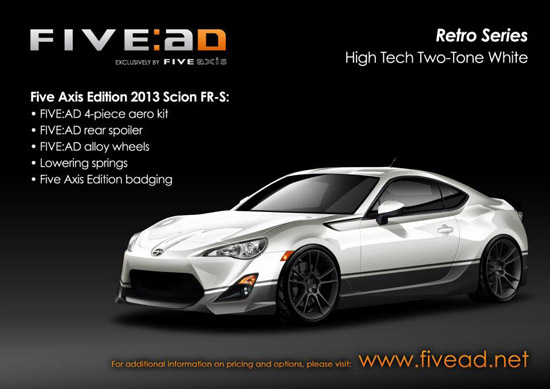 It’s difficult to speculate how the popularity of the AE86 would have fared without Initial D, but it’s clear that a manga about a humble teenage tofu driver managed to exert influence far beyond its intended audience. Even today, Initial D is recognizable among car circles on both sides of the Pacific and it would be foolish to say that Shigeno’s work didn’t have a huge influence on the popularity of the AE86. Would they still be bought and sold for high prices in both Japan and the U.S. without Takumi? Would the FT-86 have turned out the way it did if not for an anime series? Whatever the answer, those Toyota designers and engineers probably wouldn’t have guessed their humble car would turn in to this.