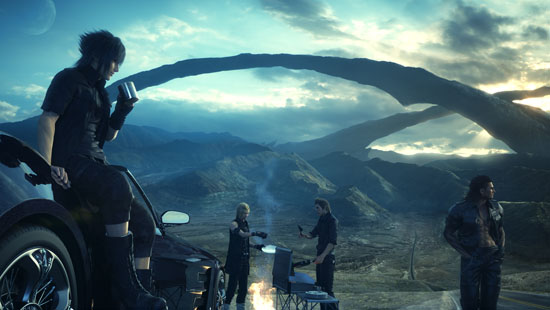 Every Final Fantasy game (well, most of them) is supposed to be a big departure: it’s part of the franchise’s design that every game starts over from the barest superficial elements and builds a completely new thing upon them, keeping only a mascot character or two. So despite the risk of spooking JRPG traditionalists– FF was never really a traditionalist series– it’s really not a big deal that the new game is about a bunch of bros on a sightseeing road trip. (I’m sure there’s also some “save the world” stuff or whatever.)

What’s more, it drops turn-based RPG combat altogether for… action game battles?! Specifically, the guys’ big weapons, slow movements, and brawls with local livestock look a lot like Monster Hunter, a game whose popularity and influence in Japan cannot be overstated. We shouldn’t expect Devil May Cry on one end, nor Destiny on the other, but a hack-and-slash action game is perhaps the furthest in genre that a main-line Final Fantasy game has ever ventured. (FFXV was originally concieved as “Versus XIII”, a spinoff).

Meanwhile, the Internet is having a good time with the # FF15クソコラグランプリ (I’ll go out on a limb and call it “FF15 Crap Collage Grand Prix”) hashtag on Twitter. When the boys look on in awe at their surroundings, it didn’t take the internet too long to figure out that those boys could be looking at anything, and in that spirit, the internet has put anything there in front of them. I’m personally fond of the idea of them marveling at the double-seater bike from Nozaki-kun. 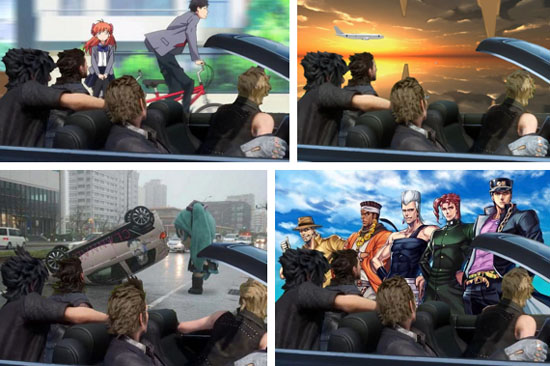