Tactics Ogre: Let Us Cling Together 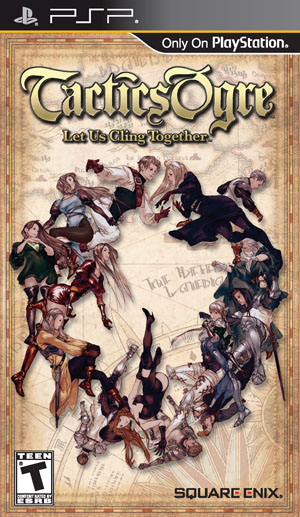 Final Fantasy Tactics is one of the only games where I’ve rolled a clock all the way up to 99 hours, 59 minutes. I mastered every job and saw every side-quest. I relished in its simple five-man combat squads and engrossing skill lists. I loved Orlandu. I crushed on Agrias.

Thus Tactics Ogre: Let Us Cling Together, a remake of FFT’s spiritual predecessor, is a safe bet for me. It taps into everything I love. Moving characters around a grid. Buying skills. Dual wielding ninjas. The differences are small, but appreciated. Hawkmen who flit around the battlefield ignoring terrain are a personal favorite, hitting a far off enemy with a fireball that somehow inflicts ‘charmed’ status is another.

Tactics Ogre also comes bundled with a perennial favorite of mine: overarching political drama. Less centered around magic than Final Fantasy Tactics, the story instead focuses on betrayal, obligations to lord and land, and the concept of heroism. Today these themes seem rote. Fifteen years ago, when Mario was jumping on turtles, they were revolutionary. A videogame involving the massacre of civilians was positively unheard of, especially on consoles. The touched up translation, with its five dollar medieval words, shines brilliantly. It might be my favorite part of the game.

But things are never perfect. ‘Byzantine’ barely comes close to describing the skill system’s complexity. Leveling classes instead of characters seems like a good idea (if one knight is level 12, all knights are level 12) until the grind sneaks in. If no one’s leveled as a mage, then all mages are level 1. Low level units get a bigger share of the experience and grinding can be alleviated by setting your units to auto-battle on random maps, but those are halfway solutions. At its best it’s annoying, at its worst it encourages a lack of variety. Why should anyone play a first level ninja compared to a twelfth level berzerker? 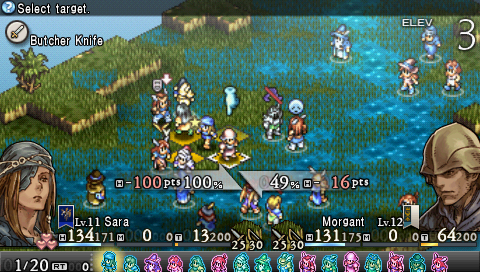 But we have to take the good with the bad, and Tactics Ogre has so very much good. During the Playstation era Strategy RPGs felt prevalent. It’s a renaissance I’d hoped would recur on the PSP, and I was encouraged by games like Jeanne D’Arc and the Final Fantasy Tactics remake.  But the genre seems to have stalled once again. Strategy RPGs are few and far between these days, so it’s nice to have Tactics Ogre to remind us of what could’ve been.