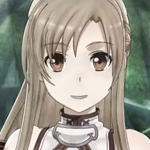 Bandai Namco Games is bringing Sword Art Online: Hollow Fragment to PS Vita in North America and Europe this summer via PlayStation Network. As a bonus, the Vita release will also include the Sword Art Online: Infinity Moment game that was previously only available on PSP in Japan.

To hype up the new game, Bandai Namco put together a new English trailer for this week’s E3 2014 event, introducing the infamous Player Killing guild known as Laughing Coffin, along with its leader PoH. Dig into the preview below.