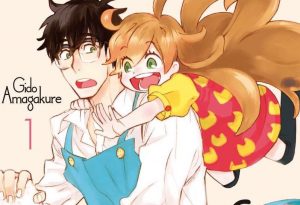 Gido Amagakure‘s Amaama to Inazuma manga, AKA Sweetness & Lightning, is about to end its run. According to the latest issue of Kodansha’s Good! Afternoon magazine, the series is set to conclude when the next issue hits stands in Japan on August 7.

Sweetness & Lightning originally kicked off in the magazine back in 2013, and has been compiled into 11 volumes so far. Crunchyroll simulpubs new chapters, and also streamed the 2016 anime adaptation as it aired.

Here’s how they set up the story:

Kohei is a single father and high school teacher who lives with his only daughter. A chance encounter brings him together with Kotori, one of his students. The three of them start to meet together to make meals. None of them know how to cook, but they all love delicious food! ”sweetness & lightning” is a heartwarming and fun experience that you’re sure to love!