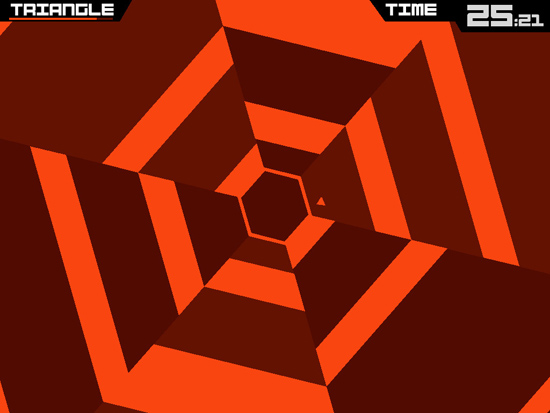 Terry Cavanagh is a pretty slick game developer. Some of you may have experienced his work in VVVVVV, a sly Metroidvania-style platformer with a simple but stylish look and some amazing tunes. Now Cavanagh is back with his first iPhone/iPad game, Super Hexagon, and it’s a dangerously addictive portable treat.

Super Hexagon is kind of tough to explain while making it sound interesting and fun, but trust that it’s both. Using the touch screen of the iPhone or iPad, players are given the deceptively difficult task of moving a small triangle in a circular motion to dodge incoming walls and obstacles. The patterns start out tough enough and only get more taxing throughout, so the scoring system in Super Hexagon is entirely time-based. Each attempt is an intense exercise in adding just one more second. Survive and hope you enter that zen state that carries you through the toughest spots.

It’s telling that the first stage of Super Hexagon, simply called Hexagon, is listed as Hard. There’s no Easy or Normal to be found. After that you’ve got Hexagoner and Hexagonest, which are Harder and Hardest, respectively. A few more can be unlocked upon completing those, but it’s a long and difficult road toward mastery. What initially seems impossible, however, eventually becomes second nature. When I first started playing I could barely scratch my seconds into double digits, but a week later and 70-80 seconds in the Hexagon stage was a bare acceptable minimum. Perception of time shifts when playing; seconds start to seem like insurmountable hurdles, and that’s half the battle.

The real fun comes when you start competing with friends. Super Hexagon uses the Game Center app to keep track of achievements and leaderboard times, and the only thing more motivating than topping your own best time is demolishing a friend’s. I’m currently embroiled in a brutal war that separates a friend and myself by mere milliseconds. It’s absolutely maddening, but it brings out that true score-busting spirit that’s lacking in so many modern arcade-style games. Throw in some great, thumping chiptune music from Chipzel and you’ve got a must-have for anyone with access to an iOS device. Hop on Super Hexagon now and you can still catch its 99¢ launch sale, which Cavanagh recently extended due to the overwhelmingly positive reception it’s received thus far. The regular price is $2.99, which is still a more than reasonable asking price for something many will no doubt obsess over for quite some time. 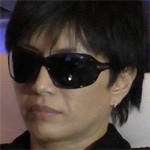 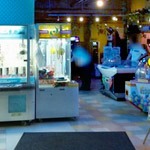 Japanese Arcade Mikado Wants You To Get Married There