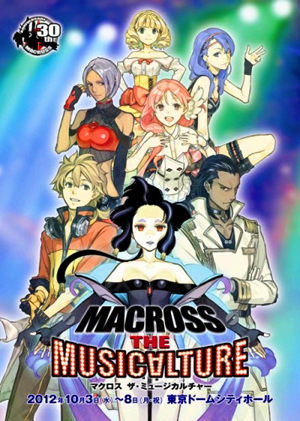 In celebration, a live-action stage musical called Macross the Musicalture (a play on Macross’s protoculture), premiered this week at Tokyo Dome City Hall. Musicalture is set 50 years after the original series, aboard one of the colonies that left earth in search of peace. A new Miss Macross competition is held onboard to boost the colony’s stagnating economy, setting the stage for, well, lots of music.

The musical, which ran from the 3rd to the 8th, was reportedly beset with a few last-minute cast changes, but reviews on Japanese blogs were largely positive, with one tweeter mentioning a special appearance by May’n, who played Sheryl Nome in Macross Frontier, and plenty of classic Macross songs.