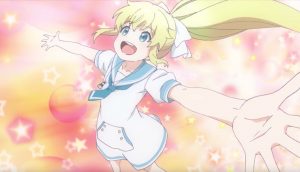 ForwardWorks’ smartphone action game Sora to Umi no Aida (Between the Sky and the Sea) is coming to Japanese TV in the form of an anime adaptation, and the latest promo has it set for an October 3 premiere. The series centers on Haru Soramachi (voiced by Karin Takahashi), who moves from Tokyo to Onomichi-city, Hiroshima to become the first female space fisherman in the world.

The October 3 premiere is coming to TOKYO MX and Sun TV in Japan, followed by BS Fuji and AT-X a day later. Lead voice actress Karin Takahashi narrates the new promo, which you can see in action below.