With fansubbing long a part of anime fan culture and the internet enabling near instant sharing of information and files, anime and manga fans have been steadily pushing for faster and faster turn-around on domestic releases. Traditional DVD releases have gotten a lot faster than they used to be, but they can’t possibly keep up with fans’ desire to know what’s going on with shows as they air on Japanese TV. So Japanese and American companies are finally jumping on the digital distribution bandwagon already established in the music and domestic TV industries.

In addition to putting up episodes of previously released shows on custom sites or general streaming TV outlets like Hulu and Joost, we’ve just finished up the first season to dive into simulcasting – delivering subbed episodes either exactly timed with the Japanese TV airing or very shortly afterward. It seems to be working out pretty well, barring some notorious security issues with FUNimation’s video service that have thrown a wrench into the One Piece simulcast.

With some of these simulcasts finishing up and new ones starting, here’s a current run-down of the available series. Nestled in a quiet corner in Rome is a charming restaurant, Casetta dell’Orso, where all the staff are handsome older gentlemen in glasses. Nicoletta, the semi-estranged daughter of the restaurant owner’s wife, moves to Rome and begins working for the restaurant and develops a romantic interest in Claudio, one of the camerieres.

This series is one of the promising outcomes of digital distribution – it’s encouraging Japanese companies to release shows that might not otherwise see the light of day here, or at least would have trouble selling well enough on DVD to recoup costs. Romantic manga featuring oyaji (middle-aged men) are an established niche in Japan, but haven’t much been explored here, and with anime and manga fandom skewing fairly young it’s questionable how open the audience is to such a concept. But it’s a great series, so I’m glad that the simulcasts have given it a chance stateside.

Dorky student Yasaka meets beautiful older girl Arashi at his town’s coffee shop. But soon he finds out that Arashi isn’t exactly what she seems – she’s actually a ghost with the ability to travel through time (and take Yasaka with her)! Based off a manga by Jin Kobayashi, the author of School Rumble.

Based off the manga Black God, currently being released by Yen Press. Keita Ibuki has a chance encounter one night when he tries to save a girl named Kuro from an attacker. Kuro is a Tera Guardian, and Keita is soon drawn into a dangerous world related to the Doppeliner system, which caused his mother’s death years ago.

This is the only simulcast series that’s dubbed rather than subbed.

A short special following up on the original series of La Corda d’Oro. Based off a visual novel dating sim for girls (and it obviously shows), the series follows Kahoko Hino, a girl who attends Seiso Academy – a school known for its separate department for talented music students. Though Kahoko doesn’t play any instruments, she is able to see Lilli, the musical fairy who blessed the school’s original founder. Now that someone can see him, Lilli sets off a major musical competition across the school – and volunteers Kahoko to compete using a magical violin! This marks the first simulcast of a yuri series! When Akira heads in for her first day of high school, she runs into Fumi on the train. Though she doesn’t recognize her at first, Fumi is actually her childhood friend from 10 years ago, just moved back to Kamakura. The two begin to rekindle their friendship, and maybe something more.

An ecchi comedy series centered around “charger” girls from an alternate dimension who can use electricity to remedy people’s depression. Plug, one of the chargers, has a new assignment whose brother seems determined to interfere.

Comedy series based on a 4-koma manga about an orphaned middle-school girl who lives and works at a newspaper delivery office staffed entirely by cute girls.
Continuing simulcasts:

Does this actually need any introduction? Knowing a license to print money when they see it, Bones revisits Hiromu Arakawa’s hit manga a second time. Rather than a sequel, this one is a retelling meant to stick more closely to the original work. For a full rundown on the similarities and differences, check out the full feature on FMA: Brotherhood in the current print issue!

Phantom: Requiem for the Phantom

Bee Train continues their string of almost-identical girls with guns shows, following up Noir, Madlax and El Cazador de la Bruja. In a departure from the previous ones, however, Phantom is an adaptation of a visual novel game by studio Nitroplus and stars a teenage boy paired with the requisite quiet girl assassin. Waking up with no memory, the young man finds himself the tool of the crime syndicate Inferno. Given the code name Zwei, he’s paired up with the aforementioned girl (code name Ein) and tasked with bringing down some serious violence on Inferno’s enemies. Along with Ristorante Paradiso, this series is a strong example of the other reason, apart from helping to cut down the need for fansubs, that digital distribution is good for the domestic industry: the relatively slight overhead for digital release as opposed to full DVD distribution seems to be allowing the release of shows we might not normally see. Kaasan – Mom’s Life is based off an autobiographical newspaper comic by mangaka Saibara Rieko about balancing her manga job with being a housewife and mother of two.

Shows like these probably wouldn’t sell all that well on DVD. They’re designed to be watched on television really, but getting anime on TV is a tricky prospect here, and still usually grabs a fairly limited audience based on where it can get air time (Adult Swim, Anime Network, etc.). Online distribution gets the series released with less initial overhead, draws in some advertising revenue, and nicely replicates the casual “watch it and move on” way the show is intended to be approached.

You all know what this is. For those of you who were ahead of where the previous Naruto releases were at, or just wanted to skip some of the series, the newest episodes are going up each week.

Historical and genre parody all rolled into one crazy shonen anime package. The end of the samurai era has come and Japan is being forced out of its isolationist policies – but not by Admiral Perry’s US fleet this time. Instead, Japan finds itself swarmed by aliens who quickly occupy the country and make the Shogunate into a puppet government. Samurai are disarmed. One young samurai named Gintoki takes odd jobs anywhere he can, and has a tendency to break every rule in the book along the way.

The release schedule for this series is a bit weird, because it was already well into the show before simulcasting started. For every new episode that goes up, a handful of older episodes are also added from the beginning. Viewers new to the series might need to wait a bit longer before the gap between old and new episodes is closed Unlucky teenager Hayate continues his job as butler to rich-girl Nagi in order to pay off his parents’ gambling debts. On top of performing the standard duties, however, Hayate also has to act as Nagi’s bodyguard and entertainment! Plenty of hijinks and otaku in-jokes abound.

A cute magical girl series by Peach-Pit, the duo behind DearS and Rozen Maiden. Amu seems “cool and spicy” to all her classmates, but it’s largely a facade because she can’t express her real feelings. Wanting to change and become the person she wishes to be, Amu wakes up to find three colorful eggs! As they hatch, tiny adorable spirits called Guardian Characters emerge and allow her to transform into different personalities and abilities. Of course she’s not the only one with Guardian Characters, and there seems to be some trouble brewing regarding the characters and her school’s student council.

One of the biggest shonen series out, especially among fujoshi circles. Nebbishy middle school student Tsuna gets hijacked by Reborn, a weird talking baby hitman from the Vongola mafia family. Reborn is determined to turn Tsuna into a proper future boss for the Vongolas, even if it takes repeatedly shooting him in the head with special “Dying Will” bullets to make him temporarily useful. Needless to say, various members of the other mafia families don’t exactly give Tsuna much peace while he’s being trained. This is actually the second season of Chi’s Sweet Home, but it doesn’t really matter whether you’ve seen the first season or not. Based off a manga in Kodansha’s Weekly Morning magazine, the series is a cute, heartwarming story about a family and their pet kitten. The episodes are only around 3 minutes long each, and center entirely around kitten Chi doing adorable things. Yet another series that would probably never work for a DVD release, but digital simulcasts are perfect.

Saki Miyanaga knows how to play mahjong, but absolutely hates it – her family required her to play with them, but winning or losing resulted in punishment. As a result, she developed the incredibly difficult skill of always maintaining a zero score. When students at school discover her ability, she’s recruited into the mahjong club. Along their path to the national tournament, can she actually learn to like mahjong and fight to win?

In the not-so-distant future, the world is largely ruined due to the oppressive system of carbon credits instituted to cut down on global warming. Schoolgirl Kuniko Hojo fights with the guerrilla group Metal-Age against various government agents and other shady characters. Strong design work by Range Murata (Last Exile, robot) and production by Gonzo.

This one is a bit different from the other series. Rather than being a TV show, it’s an ONA or original net animation, produced for streaming on Yahoo! Japan. Episodes come out every two months.

In the future, probably in Japan, robots and androids are now in practical use among many people. One young man, Rikuo, accepts the standard view that androids are merely convenient tools. But one day he discovers that his android has been taking detours to a strange cafe where the central house rule is that there must be no discrimination between humans and robots, and begins to question the common wisdom about androids. Yet another run through the SF staple of exploring the line between androids and humans, with Asimov’s laws of robotics still kicking. 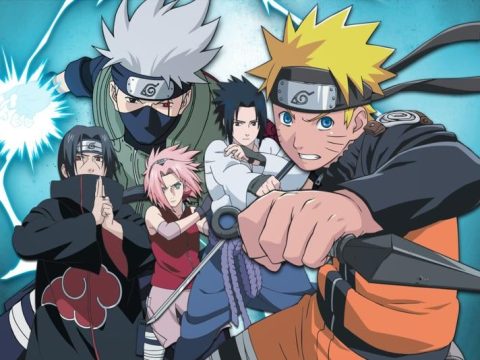 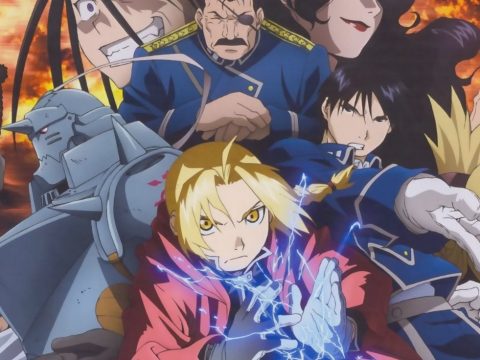 On October 3, We’re Remembering What Fullmetal Alchemist Taught Us

Fullmetal Alchemist: BrotherhoodGaoGaiGartonikawa: over the moon for you 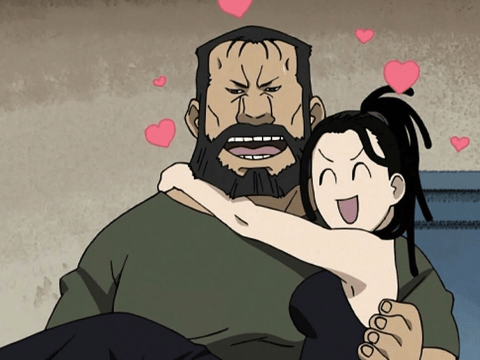