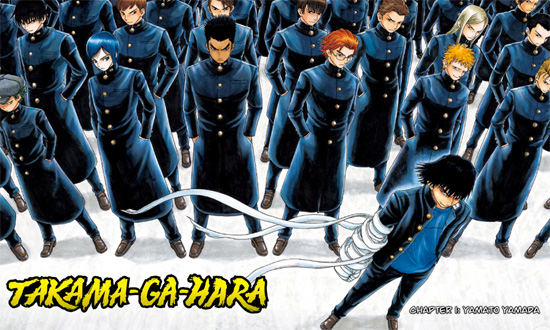 Shonen Jump Alpha, Viz Media’s digital home for everyone’s weekly Shonen Jump manga fix, is continuing to add incentives for new readers to hop aboard. Previously you kind of had to be knee-deep in long-running series like Naruto, One Piece, Bleach, and to a lesser extent Toriko to keep up with things, but additions like Nobuhiro Watsuki’s latest Rurouni Kenshin manga and Kouhei Horikoshi’s Barrage have added some fresh starts to the selection. The next challenger vying for your weekly attention is Jyuuzou Kawai’s Takama-ga-hara, and so far it looks like it might be another shonen series worth following. 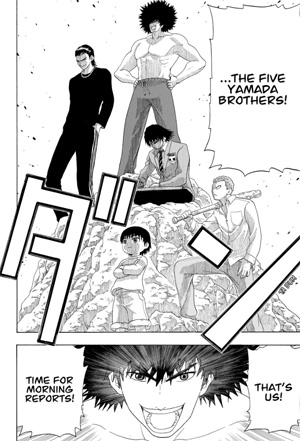 Things get off to a somewhat rocky start in Kawai’s series, as it slides under the scrutiny of every well-versed shonen fan’s microscope. The art is decent enough, but it’s Kawai’s firmly stated goal to “draw battles between those who have awakened to the powers of gods in a fresh way that’s never been seen before” that will likely raise the most eyebrows. It’s a bold promise from a brand new series, but there’s plenty of room to deliver on it here.

Takama-ga-hara follows the five Yamada brothers, each of whom excels in some manner of physical strength. Even the youngest brags about beating some mean older kids and dominating elementary school as a third grader. The odd man out, then, is Yamato, who turns his back on such brutish activities in an effort to hone his manga-creating skills. It remains to be seen whether he’s any good or not; his brothers certainly don’t think so, and his classmates also turn up their noses at his hard work. Yamato’s bros want nothing more than for Yamato to join them in following their family’s simple motto: BE STRONG! “Manga is for readin’, not drawin’!” one remarks, but Yamato doesn’t care. He doesn’t want to get strong, and the rest can’t figure out where he went wrong.

If Yamato’s vow to “conquer Weekly Jump” sounds like something implemented to fill the void left by Tsugumi Ohba and Takeshi Obata’s recently ended Bakuman, well, that was my immediate concern, as well. However, the appearance of a group of cone-pompadoured yanki delinquents puts Yamato in some combative crosshairs, and before long it appears his longing to win the Tezuka Award Grand Prize will be overshadowed by a more immediate awakening from within. Yes, as hard as he’s tried to avoid it, it looks like the power of gods bubbles in Yamato’s very blood, and all it takes is a merciless attempted pounding from one of the aforementioned delinquents to bring it out into the open. 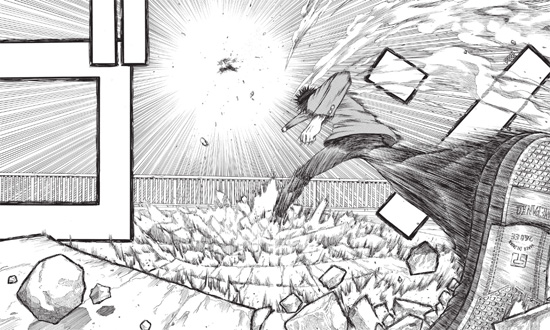 While both the premise and art didn’t impress me at first, I was way into it by the end of the first 60-or-so-page introductory chapter. The possibilities for Takama-ga-hara from here are wide open, with Yamato ending the chapter wondering just what in the world is going on with his right hand, and others from the fringes seem to take an interest in his budding powers, as well. It’s tough to say whether or not we’ll really see action depicted as “never seen before,” but the chapter is capped with some really dynamic panels that have me itching to see what Kawai has up his sleeve next.