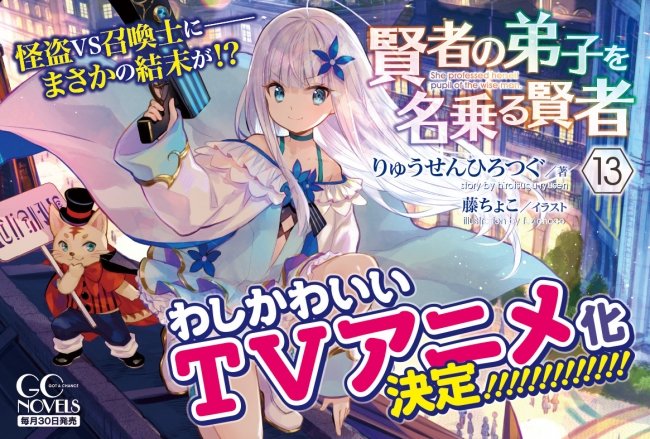 Another fantasy light novel series has officially been picked up for an anime adaptation. An anime was announced for Hirotsugu Ryuusen’s Kenja no Deshi wo Nanoru Kenja, AKA She professed herself the pupil of the wise man, with more information to come as it’s decided.

The series first kicked off on user-generated novel publishing site Shousetsuka ni Narou back in 2012, followed by publication as part of Micro Magazine’s GC Novels imprint in 2014, with added illustrations by Fuzi Choco. The series has printed a million copies in Japan so far, and it also has a manga adaptation illustrated by Dicca Suemitsu.

The isekai tale finds Kagami Sakimori—who roleplays as Dumbruff, one of the Nine Wisemen, in VRMMO Arc Earth Online—transported to another world where the game is real. Now he can’t log out, and to make matters even more complicated he finds himself in the body of a beautiful girl. He decides to call himself a disciple of the Wisemen, and sets out on a quest to seek them out.

she professed herself the pupil of the wise man 1