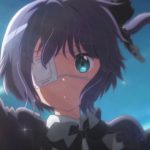 We’ll have to stay tuned for further details on the format and timing of Sentai’s release.

Love, Chunibyo & Other Delusions! Take On Me continues following Rikka, who despite being a third-year student still holds on to her “chunibyo” syndrome. Yūta and Rikka are also still together, but things get shaken up when Rikka’s older sister Tōka says she plans to take Rikka with her to Italy. Yūta and Rikka’s friends suggest they elope so they can stay together, thus kicking off their big-screen adventure across Japan.