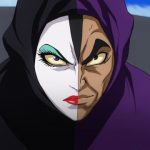 Toei Animation and director Junji Shimizu are teaming up to breathe new life into Go Nagai’s Mazinger Z with anime film Mazinger Z: Infinity. It already made its debut at the International Rome Film Festival, followed by a general theatrical release in Italy, and its next stop is France on November 22 and Japan on January 13, 2018.

With more premieres to look forward to, a new trailer is here with a bunch of fresh footage and a sample of Kouji Kikkawa’s “The Last Letter” ending theme. Check it out below and keep reading for more cast member news.