Secrets of the Otaku-Verse: Episode Nine 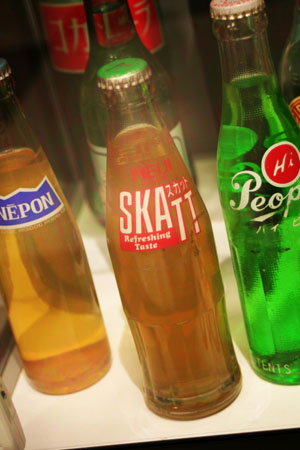 The road to hell is paved with good
intentions and vintage bottles of SKATT!

According to leading numerologists (and who knows better than they?), the number nine is associated with “tolerance, generosity, forgiveness, passion, creative energy, success, and romance.” But after filming episode nine of OTAKU-VERSE ZERO, I can’t help but think about the number in relation to smashed-up bottle caps, walls of tissue packets, old matchbooks, and crunky old soda bottles bearing the words “Refreshing Taste Skatt!”.

That’s because the latest episode of OVZ is dedicated to the Tokyo Novelty Museum, a repository of earthly delights that most of us take for granted: promotional items, giveaways, mascots, and other things that delight consumers like us for moments at a time before we thoughtlessly cast them away into the great dustbin of history.

Recently opened in Tokyo’s ritzy Ginza ward, the Novelty Museum is the brainchild of economist and collector Takuro Morinaga, who seeks to educate both the public and corporations alike about the genuine value of these ephemeral goods.

But when OVZ director Sugi-san and myself first ventured out to the Novelty Museum for location scouting, I didn’t quite know what to expect inside. As we wandered the pair of rooms filled with crowded glass cases overflowing with colorful goodies, my initial impression was that the place was of a piece with Nakano Broadway or other antique collectable stores that dot the Tokyo landscape. It wasn’t really until I saw the vintage row of airplane barf bags and banana stickers that it dawned on me: this was a museum of trash that the march of time was slowly turning into treasure. 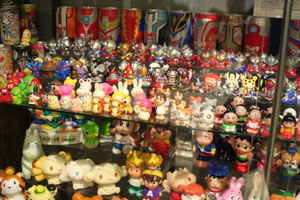 Japan’s bestiary of cute mascot characters!
Name them all, and you win a prize!

The Museum’s collection and Morinaga’s curation made it clear: Japan has a tradition of advertising via promotional goods that goes back centuries to paper lanterns adorned with shop names, to collectable medicine wrappers with pictures of the leading Kabuki stats of the day. America may have invented mass market advertising in the age of TV and radio, but as walls of collectable Pepsiman and Star Wars bottlecaps in the museum can testify, Japan has certainly managed to put its own unique spin on the field as well. What would the Land of the Rising Sun have been like without those packs of advertising tissue or drink coasters advertising the Fuji Topless Club? The mind staggers.

We came back for shooting a few days later. The segment plays out very much like it was filmed. A crazy crowded location like the Novelty Museum makes it easy to simply point in any direction and say, “hey, check this out.” Some footage did not make the cut, including a hard hitting exposé on the museum’s paper cups and cereal boxes collections. Oh well, maybe next time! 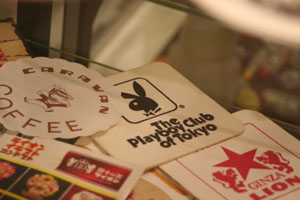 If only this drink coaster could talk…

Aside from Yuu Asakawa’s non-stop smiles and peels of laughter, there’s something else about this episode you may want to take note of. There’s a fairly big announcement at the end that I’d like to repeat here. Starting next week, OTAKU-VERSE ZERO will be featured on Crunchyroll.com! Look for some exciting changes to our official webpage at kzstation.com/ovz/ as well! See you in seven, perhaps one of the wisest and most spiritual of the numbers)!

Patrick Macias is the editor in chief of Otaku USA magazine. His blog can be found online at   www.patrickmacias.blogs.com