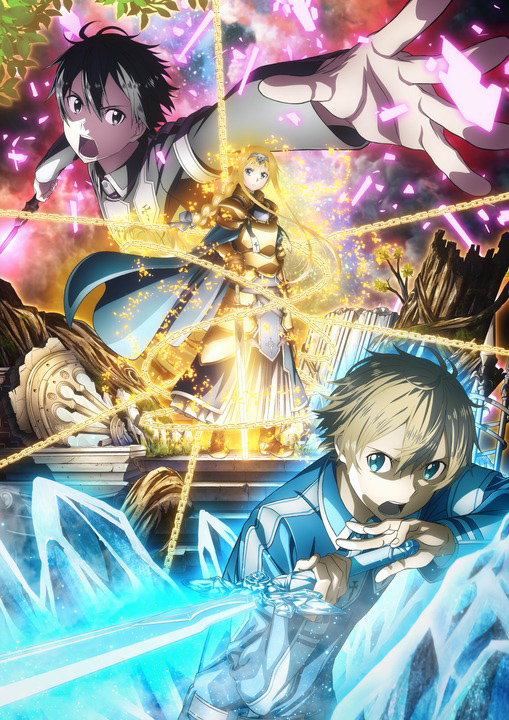 Here’s an exciting follow-up to this morning’s release date announcement: SAO season 3 will only be the first of four “cours” comprising the entire Sword Art Online: Alicization arc.

A cour is a season lasting roughly 12 episodes. That means in its entirety, Alicization will run about 50 episodes.

It’s unclear if all four cours of Alicization will run one after another, or whether there will be breaks in-between. Regardless, that’s a lot of SAO!

The series will cover the events of the light novels from volume nine to volume 18.

Reki Kawahara, who wrote the SAO light novels, tweeted about the news, stating “at four cours, it’s going to be a long series, but please stick with it until the end! I’ll do my best too!”

For the many fans of the series, following SAO season 3 through the whole Alicization arc should be no problem.

Kirito, Eugeo, and Alice. Six months have passed since the two disciples and an Integrity Knight brought down the pontifex, Administrator. With the fighting over, Alice has been living in her hometown of Rulid Village. Beside her is Kirito, who has not only lost his arm and soul, but also his dear friend. As Alice devotes herself to looking after Kirito, she too has lost the will to fight she once had as a knight.

Nevertheless, the time for the final load test – one which will engulf the entire Underworld with tragedy – draws relentlessly closer.

Meanwhile, in the deepest areas of the Dark Territory, the Dark God Vecta has resurrected, as if to have waited for this very moment. Leading an army of dark forces, they begin their invasion into the human empire in hopes of attaining the Priestess of Light.

The human empire force led by the Integrity Knight Bercouli prepares for a war of an unimaginable scale against the army of the Dark Territory. Even then, Alice is nowhere to be seen, nor the two heroes that saved the realm… The curtain rises on the final chapter of the SAO series’ longest and most glorious battle – the Alicization arc.