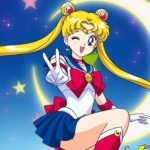 You may have heard about a campaign Japan’s Ministry of Health, Labour, and Welfare ran last year with the help of Sailor Moon creator Naoko Takeuchi. The beloved magical girl took part in a program aimed at young women from their teens to their 30s, declaring, “If you don’t get tested, I’ll punish you!”

The campaign centered on educating and promoting awareness about the spread of sexually transmitted infections like chlamydia, HIV, and syphilis, which have been on the rise in Japan in recent years. Condoms, posters, and flyers were distributed in the process.

For an overview of how Sailor Moon helped prevent syphilis and other serious diseases, VICE News made a short documentary on the subject.