[Review] Steins;Gate: The Movie, or “The Dullest Timeline” 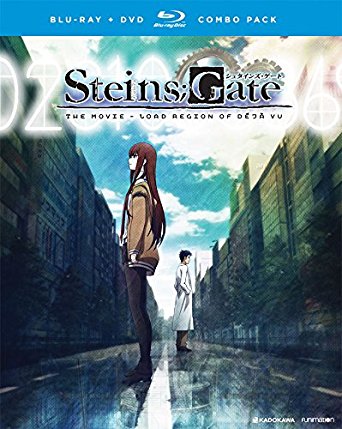 No series seemed less in need of a sequel than Steins;Gate. Convoluted as its tale of branching timelines had been in process, in conclusion it was perfect. Every dangling plot thread had been gathered, every possible plot hole filled, every question of character and motivation answered, the entire series tied into a perfect ribbon by a frankly brilliant connection to the show’s first episode. The bonus OVA even afforded dissatisfied viewers—and fated lovers Rintaro and Kurisu—the happy ending the series had stopped just shy of. Any film intended to continue that storyline had to work very, very hard to justify its own existence.

A revival that focused only on the kind of carefree hijinks that made the early portions of the series so charming would seem too flippant. Well-deserved as their happiness was, the characters had gone through too much to be left as we first found them. But a half-hearted revival that tarnished the spotless finale could never work, either: Steins;Gate earned every moment of pathos and every emotion it wrung from the viewer. To trivialize every one of Rintaro’s hard-won victories for an hour-and-a-half of hastily introduced and resolved drama would only feel manipulative.

Steins;Gate: The Movie – Load Region of Deja Vu does at least offer an earnest attempt to make meaningful its transgressions, though they sadly come to little. A year has gone by since Rintaro arrived at the Steins;Gate timeline he spent so much of the series trying to reach, and though he has mostly settled into a peaceful existence back in Akihabara alongside Daru, Mayuri and the rest of the Future Gadget Laboratory, he is tormented by visions of every failure he experienced in his attempts to save Kurisu and Mayuri. At first these instances seem manageable, mere bad memories, but the longer they continue the more vivid they become, until Rintaro is brandishing knives at Mr. Braun. While Kurisu’s arrival does a bit to ground him, his state of uncertainty eventually leads to his disappearance, leaving Kurisu with only the faintest inkling that she knew this man and, yet, the desperate desire to save him. 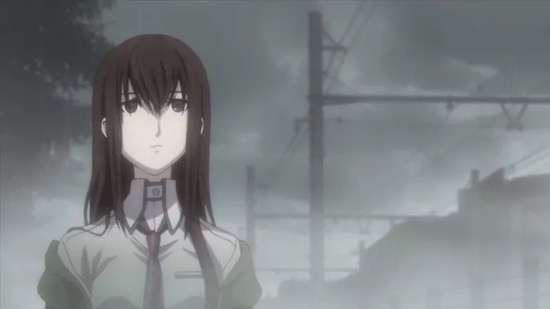 The conceit that Rintaro’s tribulations have left him with PTSD is an interesting kernel; there’s even more promise in the inversion of Kurisu and Rintaro’s roles. And from time to time there are inspired bits: a conversation that finds Rintaro phasing in and out of existence between cuts sells well how tentative, how frightening his situation must be for himself and everyone around him. But these are ideas whose time has passed. In the series they could have been excellent late-stage twists, the former a perfect venues for heightening the emotional impact of Rintaro’s sacrifice, the latter a chance at a closer investigation Kirasu’s well-defined but often distant character. Now, they feel simply like unjustified rationales for opening closed wounds. Rintaro was at peace by series’ end, the nightmare he’d lived through made palatable by everything he’d won. There was no evidence that these memories were ruining him in the final two episodes, nor evidence that he would succumb so quickly to despair as he does here.

Not that any of this comes to much. Every conflict presented in the movie is resolved so quickly, and with so little effort, that it would seem director Kanji Wakabayashi had as little conviction in this movie’s existence as the skeptical viewer. Steins;Gate’s strength as a series was—fittingly—its excellent understanding of time. No second was wasted: if the series first spent an age chronicling the mundane day-to-day of the Future Gadget Laboratory it was because director Hiroshi Hamasaki knew that it would justify the back half of the story’s most disturbing moments and most heartfelt confessions. If the latter stages sometimes dragged too long, it was because he knew perfectly well just how far he had to stretch the audience’s emotional endurance and their patience to give real importance to every victory.

By contrast, the movie squanders its first hour on the sort of hijinks predominate in the series’ front half; it’s only in the last thirty minutes that the gravity of Rintaro’s situation becomes pronounced, and yet twenty minutes later Kurisu has figured out a solution to the problem that required no great ingenuity or strife. The cast have barely forgotten Rintaro and Kurisu hardly had to live with the horror of her Sisyphean task and her emptiness before a stray word from her sparks everyone’s memories and gives her the idea she needs to bring Rintaro back from oblivion. If it ties back into a key moment in the series’ mythology much in the same way Rintaro’s own grand solution did, it has none of the wit of that solution, nor any of its emotional gravitas. 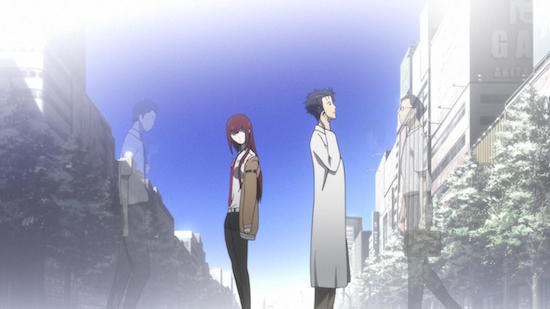 Like the rest of the movie it’s a graceless attempt to justify what on second thought could never be justified. Funimation’s dub and script try to iron out rougher patches in the production, but as before the English performers seem to miss the subtle element of their roles. Trinia Nishimura’s Kurisu is too severe and too distant to make her moments of vulnerability seem sincere, J. Michael Tatum’s Rintaro too tortured and too wise to ever sell the character’s essentially sweet dippiness. They’re earnest enough efforts, and so appreciated, but even then, the problems that plague Steins;Gate – The Movie are so fundamental that even the most spectacular of rewrites and most accurate of castings would do little to fix it.

Rintaro warns time and again throughout the movie that time traveling to fix problems only yields disappointment, as if providing his own assessment of this movie; the creators might have done well to listen to what their characters were telling them.