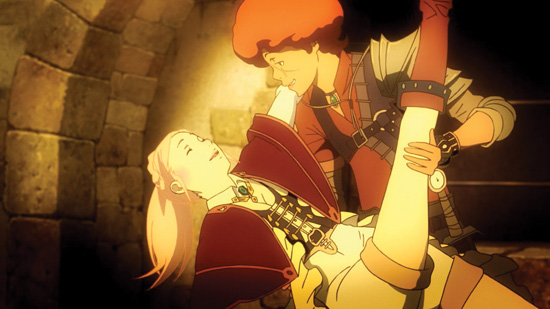 Whether they know it or not, the people of Mistarcia are constantly caught in a vice grip between gods and demons, both of which are pretty much the only thing stopping their world from being destroyed. There’s a unique balance of power at play, and smack dab in the middle is a slumbering dragon known as Bahamut. Though he lies dormant now, his seal is starting to waver, and his escape would mean the complete annihilation of everything in sight.

But who cares about all that when you’re a freewheelin’ bounty hunter named Favaro Leone? When Rage of Bahamut: Genesis begins, our puffy-haired protagonist is in the middle of fleeing from current arch rival Kaisar Lidford. The two share a heated history, and when they’re not collecting bounties they spend every free minute at each other’s throats. Their lives are about to take a turn, however, once Favaro makes his escape and crosses paths with a mysterious woman who’s trying to secure passage to a land called Helheim. She catches Favaro bragging about knowing a shortcut to that very location, and to guarantee he makes good on his promise, she curses him with a temporary demon’s tail. 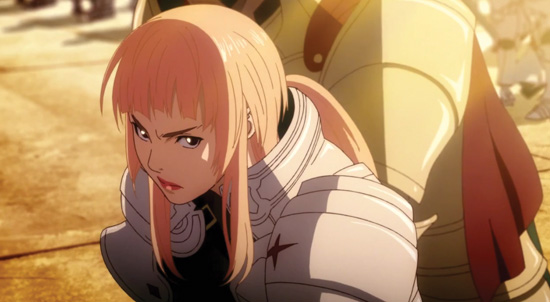 See? This is where lying gets you, folks. As far as characterization goes, the entire adventure of Rage of Bahamut hinging on a lie couldn’t be more fitting for someone like Favaro. From the very first scene, he’s an instant classic as far as modern anime goes, and the show does a fantastic job of staying true to his personality throughout his arc. The story itself, which involves a girl whose own body has the power to decide the fate of mankind, isn’t exactly something you haven’t seen before. So it’s all about the characters, designs, and execution, all of which put Rage of Bahamut up there with some of the best series in recent years.

The main reason we’re revisiting this series now is that, at the time of this writing, it recently made its Blu-ray debut. Streams may be looking better and better as each season goes by, but this is definitely something that deserves to be seen on disc. The animation’s wild momentum dips a bit near the midpoint of the series, as does the frame rate during a few of the grander shots, but strong character and monster designs make it stand out two years after it first made its TV debut in Japan. 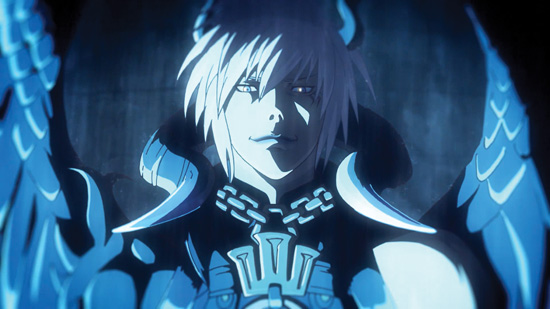 Beyond the gorgeous visuals, the development of Kaisar and Favaro as a pair is the true standout of Rage of Bahamut. It’s not just the gradual reveal of their backstory, it’s the honest, believable way they treat and react to each other. It’s impressive enough to make this 12-episode series feel like it contains more growth than others that are twice as long.

On the other end of the spectrum, the villains are the biggest letdown. They’re literally just a necessary evil, and while they naturally play into the overarching narrative, they’re not very interesting when isolated from it. Of more interest is the looming threat of Bahamut, because everything else in the periphery just serves to belie the show’s origin as a mobile game. 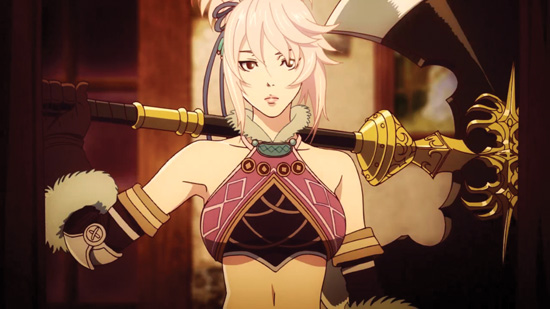 Despite the occasional bumps, Rage of Bahamut: Genesis is a series that will hold up really well over time, and FUNimation’s Blu-ray collection is a great way to marathon it. Come for the feature presentation, and maybe stay for the extras if you have nothing else to watch. The episode commentaries are done by the English voice cast, which I couldn’t get into in the show itself, and “episode 6.5” is just a recap ep used to fill in one of the weekly slots as it aired. Recommended.