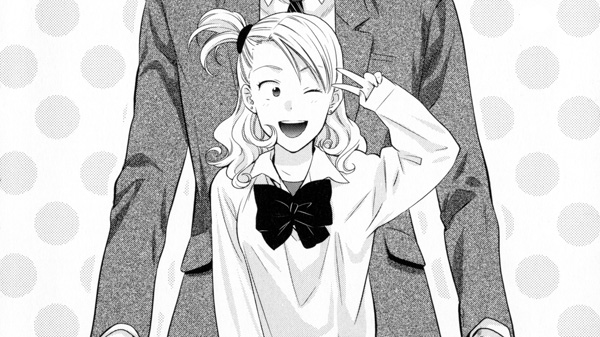 Chinatsu is 16, and she has a thing for middle-aged men with mustaches. She’s getting dressed up very nicely one morning so she can go reveal her love to the man who works at the flower store. But as she’s stepping into her skirt, she notices something in the mirror. She’s suddenly a man. A middle-aged man. And she has a mustache.

It turns out some chemical compound got out of a factory and it specifically turns high school girls into middle-aged men. So all the girls in her school are now men with mustaches, including her best girlfriend, Tomoe.

Even though she’s not in her usual form, Chinatsu still decides to tell the man at the flower store her feelings. She explains the whole situation to him, but as logical as she makes the illogical sound, he still rebuffs her coldly. Tomoe is there to comfort her, and then … well, for Chinatsu, it’s like going out on a date with a really handsome older man. It’s just that this older man happens to be her teenage female friend. So what if they kiss?

That kiss starts a whole lot of shenanigans. Oyajina! Chinatsu and Tomoe has the unique opportunity of being shonen ai and shojo ai at the same time, with the same characters. 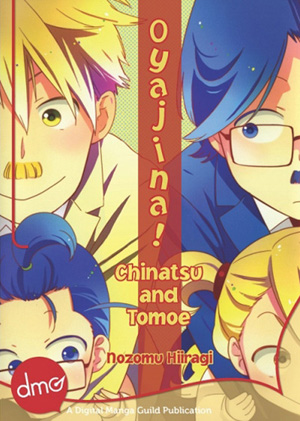 Are Tomoe and Chinatsu really in love, or are they only in love with their new forms? If Chinatsu is only interested in Tomoe romantically because she’s now a man, what will happen if she turns back into a girl? And what about all the other girls they go to school with who are suddenly handsome men? The possible dilemmas are endless.

This genderbending comedy throws around all sorts of bawdy jokes, and it’s as hilarious as it is wacky. Things get even weirder (and funnier) when the mangaka decides to switch things up and have middle-aged salarymen turn into high school girls. The absurd plot lets Hiiragi focus on humor, though the manga also has its sweet moments (believe it or not). So what if none of this could literally happen? That’s the fun of manga, and this is a definitely a fun manga to read, even if you’re not into mustaches. And if you are into them, then this might be your new favorite manga. Recommended.