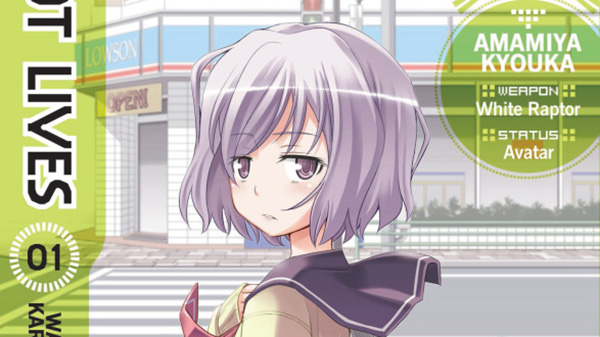 Mikami Shigeru not only plays video games to win, he’s also a designer. He’s programmed and sold a number of casual games, but he’s looking for the ultimate game experience, and he hopes someday to create that ultimate experience himself. That is until he finds a pile of research material with a mysterious game disc labeled only “Not Alive.” The disc implants itself into his body and Mikami suddenly finds himself seeing the world from the perspective of his game avatar, a girl named Amamiya Kyouka. Together they must battle through a life-and-death game with real world consequences, where the only way out is to win.

Not Lives is a good setup though not vastly different from a lot of other video game-themed manga. 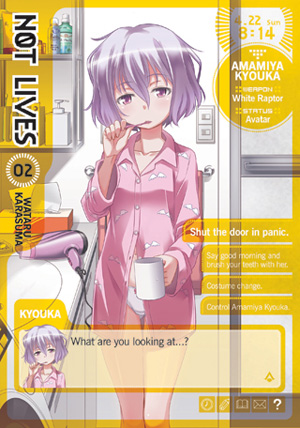 Combining death games, cute characters, and panty shots, it comes off a little bit as a moé version of Gantz, but Not Lives has its own charms. Mikami is more interested in games than girls, to the consternation of his long-suffering best friend. Amamiya, his avatar, is almost inhumanly cold and doesn’t blink an eye the few times Mikami gets a peek at her goods (well, except for that one time). The story moves along at a fast pace, never spending too long in the real world or the game world. However, the action scenes are a little confusing, as if to keep that pace going a clarifying panel or two was cut.

The art is slick but not exceptional. It’s pretty to look at but the design of the game creatures is confusing and none of the characters stand out. Still, everything from story to artwork makes Not Lives an enjoyable series with a promising start even if it does tread familiar territory.