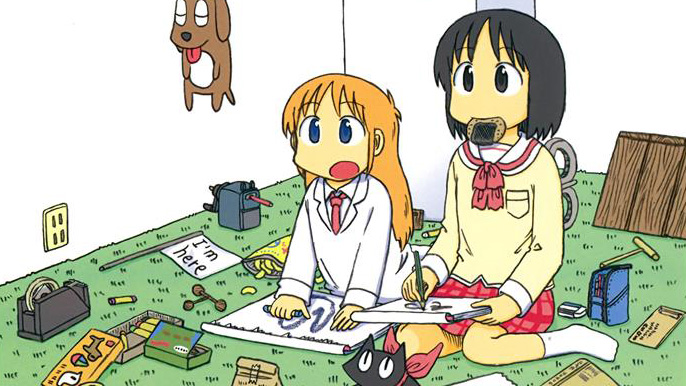 People have been telling me to watch Nichijou for years. Somehow I’ve never managed to see it, despite my friends’ insistence that the 2011 anime series is “the next Azumanga Daioh.” However, seeing as THAT show came out nearly 15 years ago, I suppose an explanation is in order.

Keiichi Arawi’s Nichijou, like virtually every Cute Girls Doing Cute Things series of the past decade, has a lot in common with Azumanga Daioh, the 1999 schoolgirl comedy manga that launched the career of Kiyohiko Azuma (Yotsuba&!). The main trio of girls includes energetic idiot Yuko, seemingly normal Mio, and reticent but talented Mai. Of course, like Azumanga before it, Nichijou, which Vertical translates as “My Ordinary Life,” injects a lethal dose of off-the-wall absurdity to shake up a comedy that would otherwise be driven entirely by cutesy reaction shots.

In the first volume alone, the school principal is murdered by a deer, an angry schoolgirl shoots a classmate with a revolver for bringing a goat to school, and Yuko saves a piece of food from hitting the ground by passing it through an elaborate Rube Goldberg machine. Most memorable of all is Nano, a robot who is convinced that her classmates think she is a real girl—even though she has a giant wind-up key grafted to her back! But despite all the guns, violence, and science fiction, Nichijou’s really just about a bunch of dumb girls being dumb together, and it’s that contrast of ordinary and insane that gives it such a delightful energy. 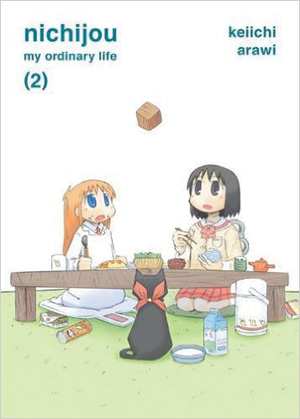 Unfortunately, Nichijou is also extremely heavy on wordplay and Japanese-style comedy, which means that the jokes don’t always land when translated to English. Entire sketches are dedicated to riffing on and modifying the tsukkomi (straight man)-boke (funny man) dynamic of manzai comedy, but without the expectations of how a manzai routine is supposed to be, it’s not always clear when you’re supposed to laugh. Puns are of course even harder, though Vertical’s translation does a pretty good job of working in English equivalents when possible. Thankfully, Arawi also has a knack for manic reaction shots and a punchy pacing to his panels, both of which make even the most obtuse jokes funny purely via their delivery.

I’m not sure Nichijou is the “next Azumanga Daioh,” but I’m pretty biased, so that’s a tough spot to steal. I will say this: it’s rare that a Cute Girls Doing Cute Things series really makes me laugh, but Nichijou made me laugh multiple times in public, despite myself. That’s basically the gold standard for comedies. Recommended.