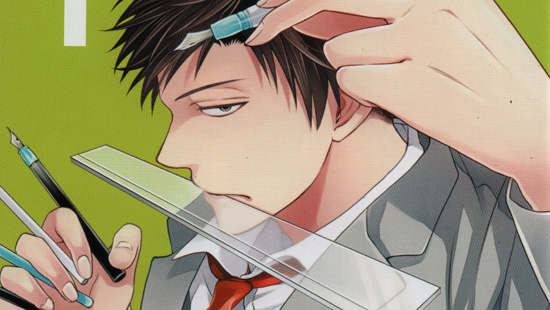 Chiyo has a crush on her classmate Nozaki, who’s tall, handsome, mysterious, and often shows up at school with bandages. When she tries to confess her love, the oblivious Nozaki doesn’t understand, but he does tell Chiyo his secret: he’s a manga artist! (The bandages are for shoulder pain and carpal tunnel syndrome.) And not just any artist: manly Nozaki is actually Sakiko Yumeno, famous girls’ manga creator. Still obsessed, Chiyo joins Nozaki as his assistant, or as Nozaki bluntly describes their relationship, “We do all sorts of things together in a particular room in an apartment.” But making manga turns out to be weirder than Chiyo expects …

If you liked Izumi Tsubaki’s massage romance manga The Magic Touch and her comedy Oresama Teacher, surprise: Monthly Girls’ Nozaki-kun isn’t like either of those titles. Frankly, it’s much better, a huge leap forward in art (pleasantly slick) and humor (combining manga industry humor with a funny school-age cast).

Chiyo soon meets Nozaki’s other assistants, such as Mikoshiba (who has a rep as a bad boy but is actually shy and good at drawing flowers), Kashima (a Rose of Versailles-type androgynous “prince” girl whom all the girls swoon over), and Yuzuki (the rudest girl imaginable). Humor comes from the way they defy shojo and shonen manga gender roles, and the subtext comes out to the front when we discover that the characters in Nozaki’s manga-within-a-manga are based on gender-flipped versions of the main cast! It’s a good enough joke that it doesn’t matter Aya Kanno used it first in Otomen.

Much of the fun, however, is manga industry in-jokes, which to misquote John Godfrey Saxe, confirm, “Manga is like sausages; it’s better not to see how they’re made.” 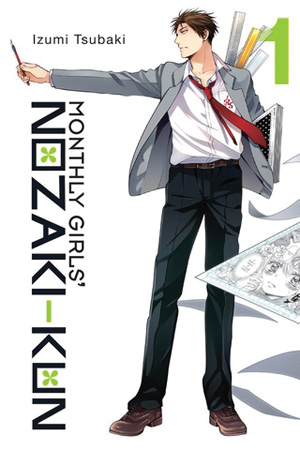 Tsubaki mocks industry truths like how in kids’ manga, even “bad kids” can’t be shown doing anything illegal (“Make the cigarettes into chocolate and the booze into juice!”). A stubborn artist, Nozaki often clashes with his editors, particularly Maeno, an awful editor who uses the artists’ manuscripts as coasters and forces one artist to put a tanuki in all her stories just because. (After she finally kills off the tanuki, he forces her to draw an elephant: “The elephant’s so big that I can’t put any backgrounds in … what should I do…?”)

The fact that Nozaki-kun is a four-panel (comic strip-style) manga puts the focus purely on humor, and you gotta respect a comic where a punchline is the characters getting so disgusted at how bad a manga is that they fling the magazine on the ground. A delightfully subversive satire, if you aren’t interested in manga sausage fests before you read it, you will be afterward. Recommended.