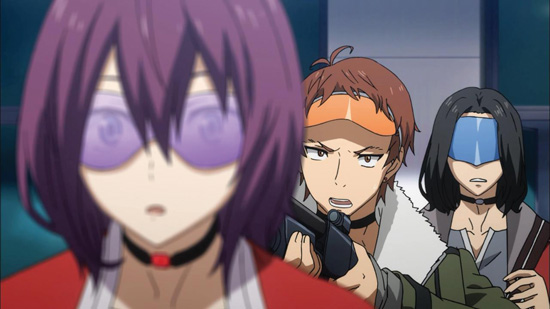 Despite being a decent-looking show, there’s something about Bloodivores that’s so incredible early 2000s. Maybe it’s the whole vampire thing, which was especially well worn in anime a decade or so ago. Or maybe it’s the characters and the overall situation, which quickly escalates from bank robbery gone wrong to bloodsucking battle royale. Either way, I’m pretty sure the name Bloodivores says all you need to know about the action that’s about to unfold.

Bloodivores may be one of the stupidest names of the fall season, but the series itself isn’t all that bad. The vampire beginnings of its fictional world can be traced back 60 years, when much of the population was hit with a bizarre type of insomnia. After being awake for over a week, many of the sleep-deprived victims understandably went mad. Thus, a cure was produced … with an unlikely side effect. Patients found themselves turning into vampires, and humanity went to war against them. While the humans won in the end, a few vampires survived, bringing us to the mixed state of today’s society. 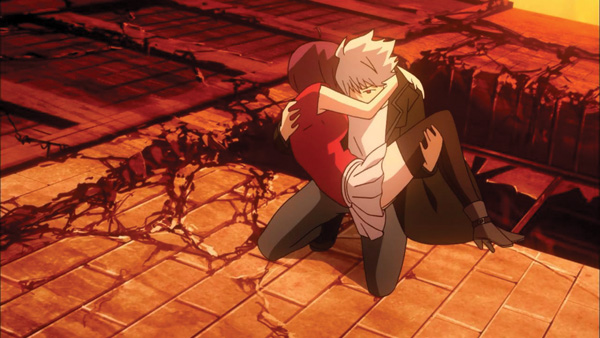 As the story picks up we follow a rare human-vampire hybrid named Mi Liu, who happens to be spending his time robbing a bank. Things don’t end up going so well, and what should have been a gang of Bloodivores getting the
loot and getting the hell out of there somehow resulted in 15 deaths. You’d think this was an open and shut case, only no one in the group claims to be the killer. With no one looking to fess up, Mi Liu and the rest of the Bloodivores are carted away to prison. Their transport ends abruptly when a militant group stops it and seemingly guns the entire gang down, but they soon find themselves very much alive in a giant warehouse.

It’s from here that the meat of Bloodivores truly shows itself. The warehouse is full of convicts who are basically told that they’re now free
men and women. The catch is that they’re now tasked with surviving in this new environment, both against themselves and a horrifying assortment of monsters that hint at the truth of their new location. And back when I said “bloodsucking battle royale”? I wasn’t joking, because everyone stuck here is outfitted with a collar that has the power to explode and blow their head clean off their body, just like in Kinji Fukasaku’s notorious adaptation of Koushun Takami’s Battle Royale. 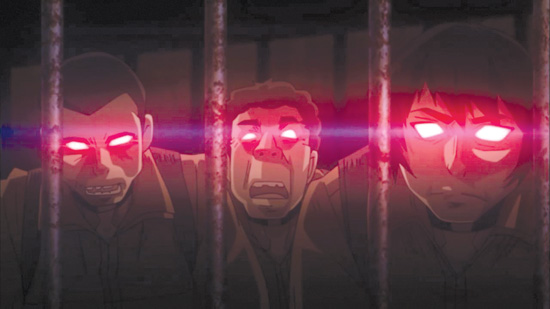 The collars really reinforce Bloodivores‘ commitment to being a genre stew that is, at the very least, worth passing some time with. This stew originated from the pen of Chinese cartoonist Bai Xiao, who serialized the story twice a week on the Tencent Comics website. The adaptation is a co-production produced by Creators in Pack, which is part of a larger Shanghai studio, Haoliners, that boasts the production of nearly 80% of all animation produced in China.

Chen Ye works as director along with chief director Masashi Nakamura (two episodes of Rokka: Braves of the Six Flowers), and the voice cast consists of anime regulars like Kenji Akabane (Sakuya in Symphogear), Eri Kitamura (Sayaka in Madoka Magica), and Sho Hayami (Wolfwood in Trigun). If you’ve already found yourself burning through every episode of Drifters and any other similarly violent action from recent seasons, Bloodivores is worth investigating. In a less crowded year it might rank a little higher, but there’s simply too much quality anime to watch right now.