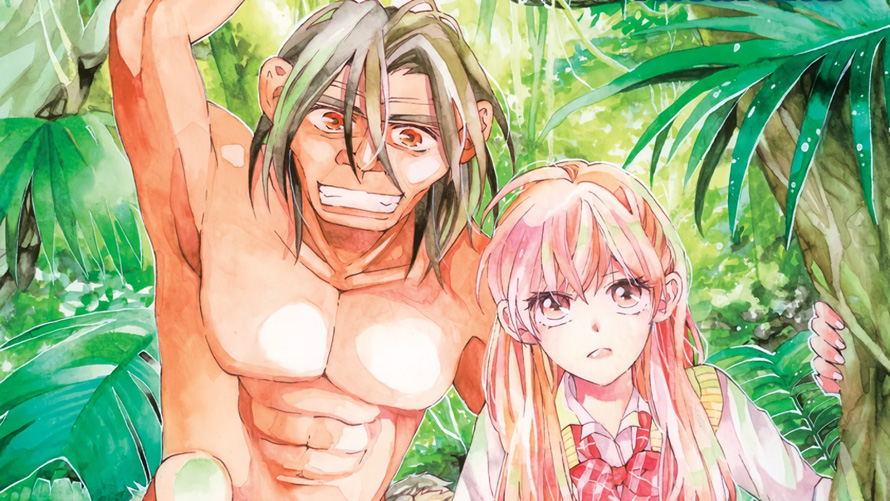 In Primitive Boyfriend, Mito Kamigome looks like a typical sparkly-eyed teenage manga heroine, but she comes from a farm family and comes by her beauty through hard labor and a diet of home-grown produce. Though her school is populated with stock types from a girls’ harem manga, she rejects all the flavors of beefcake on display, complaining, “I’m surrounded by soft, weak men…If strong men don’t exist in our modern world, then I’m resigned to be alone forever!”

Hearing her plea and approving of her dedication to agriculture, Spica, goddess of the harvest, agrees to introduce Mito to her soul mate. Mito is promptly transported 2.5 million years into 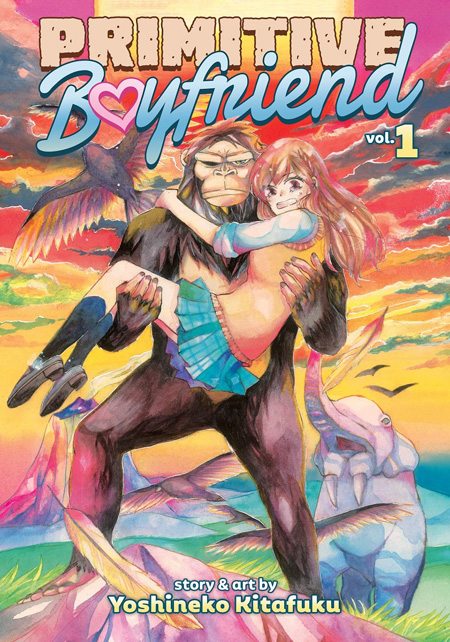 Earth’s past, where she meets Garhi, an Australopithecus. Garhi has no language, is covered in matted hair, is missing an eye, and wanders the savannah killing huge prehistoric beasts and tearing into the raw flesh with his teeth. Whether or not he’s dating material, he’s certainly the epitome of an old-fashioned guy.

It’s hard to think of another manga remotely like Primitive Boyfriend, which sets up all the clichés of a shojo romance manga, then shoves them aside for a bonkers combination of Conan the Barbarian-style action and tongue-in-cheek love comedy. Artist Yoshineko Kitafuku goes to every length to make Garhi as unsexy a caveman as possible: he looks like a cross between a gorilla and Sasquatch and is forever scowling, grunting, and/or gnawing on bones. And yet, as Mito watches him fight giant snakes, wooly mammoths and saber-tooth tigers, she starts to fall for him, a development that is played as equally romantic and ridiculous.

The modern-day scenes are drawn in an unremarkable fine-lined shojo manga style, which contrasts with the wild, scratchy, unlovely art in the prehistoric sequences. The English translation plays up the silliness with exaggerated dialogue: “Thanks, water, ya life-givin’ liquid of purity!!” Primitive Boyfriend is self-aware, funny and, above all, unpredictable, worth reading just to find out what bizarre thing will happen next. Recommended.