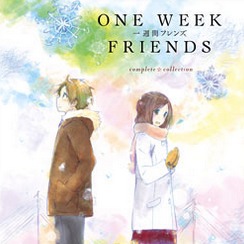 Imagine only being able to retain the memory of your friends for one week. After that, poof, it’s all gone and you’re forced to start all over again. It’s hard enough to make friends in high school as it is, so Kaori Fujimiya really has it tough. Thankfully, though, there are some people who will step in to make things better, as evidenced in One Week Friends, which

Yuki Hase is the classmate who ends up turning things around for Kaori. When Yuki spots Kaori all alone with no friends around her, he decides to become better acquainted with this mysterious loner. When he learns that every Monday Kaori loses all memory of her friends, he soldiers on regardless. Everyone deserves a chance at lasting friendship, even if it means starting fresh every single week.

Of course, no one said this would be easy. One Week Friends is an endearing, funny series that tests the limits of friendship with a truly unique set of circumstances. Does Yuki have what it takes to keep befriending Kaori anew week after week?

One Week Friends is based on the manga by Matcha Hazuki, which was serialized in the pages of Square Enix’s Gangan Joker magazine from 2012 to early 2015. The anime adaptation features direction by Tarou Iwasaki (Mikagura School Suite, Ryoko’s Case File), with Shotaro Suga (The Seven Deadly Sins, Darker than Black) on series composition for the Brain’s Base production. With all 12 episodes available in

, it’s definitely much easier to revisit the world of One Week Friends than it is to make friends every week for the rest of your life.