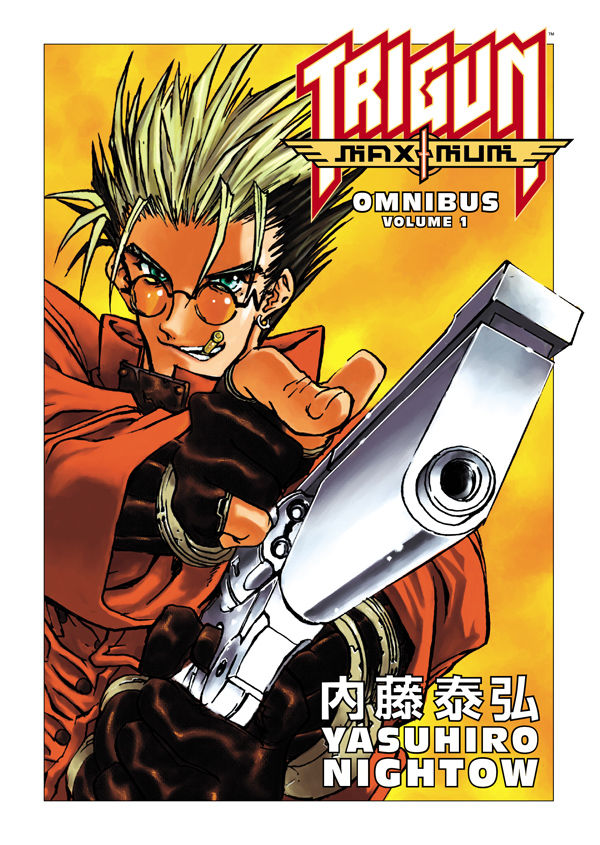 Dark Horse starts off the third hefty week of manga releases this month with a new edition of Trigun Maximum. They’re releasing this sequel series in 3-in-1 omnibus format, offering over 500 pages of bounty hunters and donuts per volume for only about twenty dollars each. Dark Horse previously released Trigun Maximum as single books but this new version makes it even easier (and cheaper!) to own the whole thing. In this story, Vash has been in hiding for two years but emerges when his home planet, Gunsmoke, is in need of some assistance. The desert sand doesn’t even have time to settle around his familiar red trench coat before an assortment of new money-hungry hunters arrive to fight for the bounty on his head.

Digital Manga Publishing has a series brand new for English publication with their one-shot title, Hentai Prince and the Stony Cat. It’s got a weird name and it sounds like this series will live up to that first impression. It stars a young man who is always fixated on his own perverse thoughts, yet is frustrated that no one recognizes him for them (usually don’t these characters have the opposite  problem… ?). To be able to find the honesty he desires, he follows an urban legend to a stone cat where he pleads his case – how will he be rewarded for his prayers? The cute girl on the cover has me suspecting a couple potential outcomes. This series is being adapted into an anime premiering next year so DMP’s release of it is a chance to experience the story in advance if you’re curious. 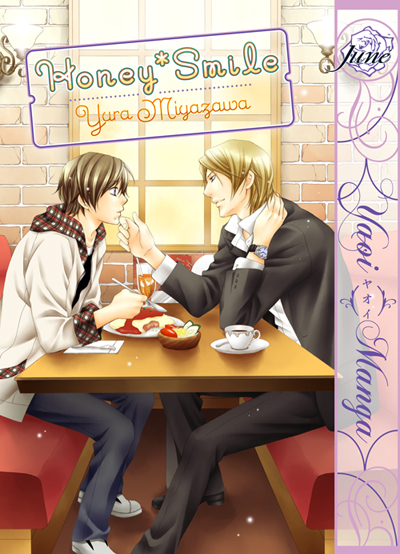 For those who look to DMP for their boys’ love, they’ve got another new one-shot out, but this time under their main BL imprint. Honey Smile is the story of a dissatisfied lawyer who finds himself softening up in the company of a young, now apparently redeemed, juvenile delinquent. I can’t imagine it’s an easy situation to get comfortable in when your day job revolves around dealing with them in a much less positive way.

Kodansha Comics’ sixth volume of Animal Land is described as one of power discovery and locale exploration for young lead, Taroza. However, some readers may be more curious to check out this volume for the special side story from Makoto Raiku’s better known series, Zatch Bell (which was released by Viz Media).

Meanwhile, it’s Edgeworth versus a vengeful ghost in Miles Edgeworth: Ace Attorney (Vol.03)… or is it? I don’t know about you, but Edgeworth seems the type who could argue a ghost into non-existence even if it was stirring up trouble. When a company’s president is found dead in his office, the police rule it a suicide, but Miles Edgeworth sees a bigger picture here in the second to last volume of his very own manga series.

Seven Seas’ third volume of Cheshire Cat Waltz is the newest addition to the growing collection of Alice in the Country of Hearts/Clover titles available in English. This third book continues the arc dedicated to Alice’s growing relationship with Wonderland’s Cheshire Cat, Boris. Don’t worry, there’s no bestiality here, just a buckle wearing pretty boy in a belly-top who just wants to love. A lot. All the time. Cats are needy creatures aren’t they? In volume three, Alice is moving forward in her relationship with Boris but an interruption arrives in the form of Peter Rabbit. 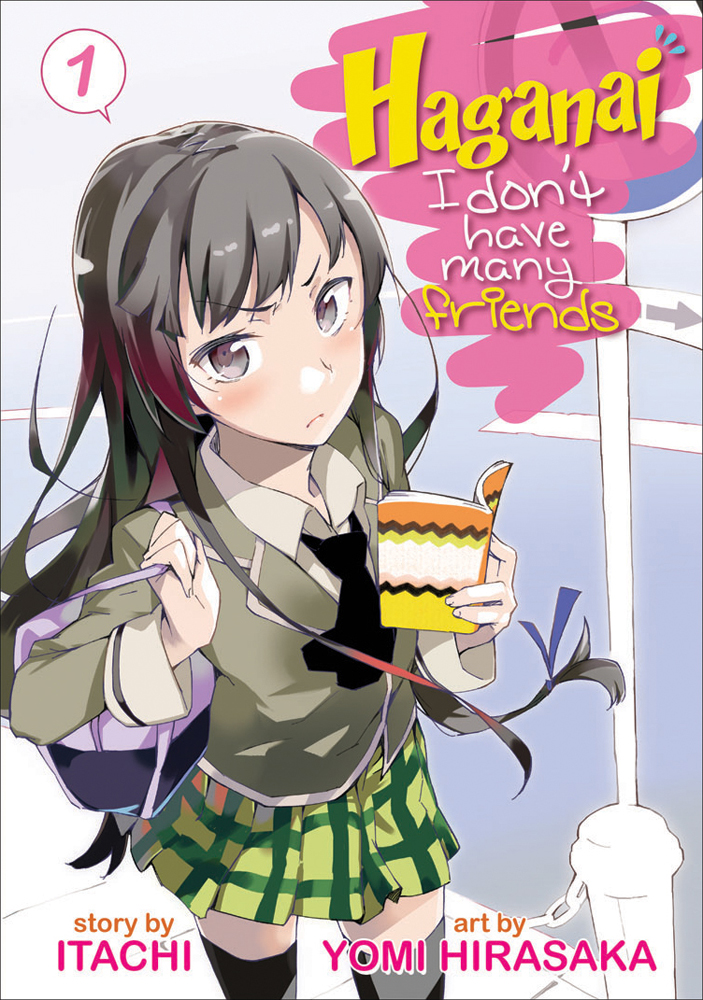 Then for something new, Seven Seas is debuting a series of their own this week – Haganai: I Don’t Have Many Friends. What a sad sounding title! It’s a prelude to what sounds like a fun and potentially sweet story, though, following the formation of a club by two socially challenged students looking for friendship and social experience. One struggles with a new school and the assumptions he’s a delinquent, while the other has always found company before with her imaginary friend. Who knows who they’ll meet in “The Neighbor’s Club”…

Viz Media has four new volumes for titles in their Sig IKKI and signature lines today. It’s quite a treat! The one I’m most excited to read is Saturn Apartments (Vol.06) since we haven’t had a new volume since May. There are only seven volumes in the series so we’re coming close to the end, and there was quite a story development in volume five. Mitsu has been asked to pilot an illegal spacecraft being created for the purpose of descending to Earth. Everyone involved has their own reasons for wanting it to succeed, but are Mitsu’s enough to risk something so dangerous? I’m so nervous to find out and see what happens. With this series, I’m really not sure what the outcome may end up being.

For a darker character-driven story, there’s Bokurano Ours which has its seventh volume now out on store shelves. In this volume the remaining young pilots are stunned to see the enemy turn tail and run, only to be even more caught off-guard when he pops up again in a very unexpected place. But now it’s Anko’s turn to fight, and this battle is different than any before it as a TV crew is present to capture their depressingly futile fight for life for all the world to see. They may save the Earth, but they’ve yet to find a way to save each other and it never stops hurting watching the battles end. 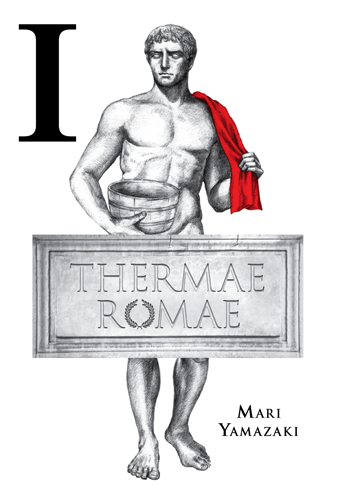 Last but certainly not least is my top pick of the week: Yen Press’ first volume of Thermae Romae. This book completely caught me off-guard. Firstly, it’s printed extra large (almost double that of a normal manga volume), sports a hardcover and has some great design work. Very classy. Second, who would’ve guessed that a story about a time-traveling Roman bathtub designer would be so fun to read? I hope that little snippet piqued your interest because this was a read that ended up being as educational as it was fun. The story follows Lucius, a Roman architect who specializes in baths. After finding himself suddenly transported into Japan of the future, he sees a whole new world of bathing technology. Through his own ingenuity, he works to bring it back to ancient Rome for all to enjoy. The book is full of information that I never thought I’d find so interesting to learn about, both in regards to Roman and Japanese culture.  Lucius’s out-of-time reactions are always amusing, as well, not to mention some of his less fortunate personal drama.  At the $30+ price point, Thermae Romae is one of the more expensive titles out there, but with the large size, hardcover binding and 2-in-1 content, it feels worth the added dollars.